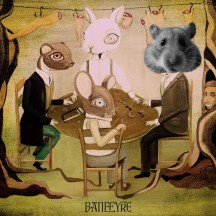 
Crippled Black Phoenix have always been a band of beautiful excess.

The one thing that struck me the most about Banefyre upon its initial launch is how gargantuan it is. Nearly 100 minutes and more than four songs over ten minutes. If you think that is a bit excessive, that is precisely what I also thought knowing how much time I would have to allocate from my day for a single album. But it was a Crippled Black Phoenix one, so of course I did it. Upon more pondering and revisiting, it isn't that out there for Crippled Black Phoenix to do this. Most of their albums go around the 70 minute mark casually, their (arguably) best album, 2012's (Mankind) The Crafty Ape is also nearly 90 minutes. That said, none of these, except for some conveniently packaged double albums that are actually two separate albums, are longer than Banefyre.

Generally with such a long album I'd complain about how you could probably find a really great 40-50-60-whatever minutes record if the band were less self-indulgent and cut off the fat. That's probably still the case, but even at their most self-indulgent, there's something about how Cripple Black Phoenix handle their soundscapes that makes it hard for me to want to click away. Even if it's not much new ground covered by this band after so much music under the band's name, and even with numerous lineup changes, Banefyre just gels despite its runtime outside of some awkward spoken word moments. To the point where I'd actually argue that the four long songs are actually the record's best.

Their usual Pink Floyd meets Mogwai of the band has had slight modifications from album to album, from the folkish A Love of Shared Disasters, to the more rocking Bronze, to the more progressive White Light Generator, to the more gothic Ellengæst. The post and prog rock influences obviously go further than just the two aforementioned bands, but it's especially here where it feels like they tap more into Explosions In The Sky-ish crescendo-core. In a way, this is Crippled Black Phoenix's most post-rock record in a long while, though I still wouldn't call post-rock the defining genre here.

There's something I can't quite put my finger on in regards to the magic of the sound. A lot of it comes to the dual vocal approach of Belinda Kordic and new member Joel Segerstedt. Though more often than not, one would handle all vocals in a single song, it gives the album enough of a kick every time they change. Mixing post-rock's and prog rock's sounds and affinity for longer songs and focusing on a more atmospheric side rather than intricate side of each of them allows Crippled Black Phoenix to really work in the long form. At any point there's beauty to focus on in the guitars, or in the keyboards, on in the vocals. The drums and bass, though not having as much of a leading role, the former especially much to keep the album driving forward.

That said, eventually the album's length does eventually come and bite it in the ass. I find each highlight less impactful because of how much of the album is still left when you reach it. Too much of a good thing. I barely mentioned any tracks as a result. I'm afraid someone might just decide they had an album's worth of prog post rock halfway through, and not reach the bonus track-ish closer that's a full on metal song with harsh vocals. A reward for the listener's patience of sorts.

Written on 08.11.2022 by
RaduP
Doesn't matter that much to me if you agree with me, as long as you checked the album out.
More reviews by RaduP ››