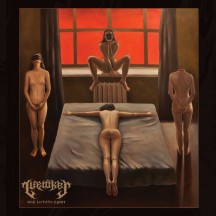 
A cartoonishly large slab of concrete falls on top of you.

Germany's Lifetaker is somewhat of a newer band, though their members have some history in some previous similar acts like Wolves Carry My Name or Vergil, but Lifetaker by itself is only on its second full length album. I found out about them through their first, Night Intruder, and though I didn't get to review that one, it still left quite an impression on me with its vicious death/black/noise-infused grind. And thankfully a lot of what I liked about it also applies to Der Letzte Raum (German for "The Last Room"), so I can make up for not reviewing their debut.

As is standard for grind, briefer runtimes can leave an even bigger impact but ensuring that stagnation and saturation don't settle in. Night Intruder was already pretty short at 28 minutes, but Der Letzte Raum goes even further with a 23 minutes one. Not entirely a "blink and you miss it" affair, but one that does leave me aching for that replay button. There's no track that goes over three minutes, with most of them actually under two. While this may make some of the ideas in each song feel underdeveloped, Lifetaker play a song just as long as they need to to hammer the point home.

In a year already filled with fantastic grind, it is pretty hard to stand out among the crowd, and I think what Lifetaker do best, apart from the unrelenting brutality of grind, is refusing to be pigeonholed in a single grind sound. The almost fun riffs of "Patrizidprotokoll" have a groovy punk feel to them, the blackened edge of "Schlafparalyse", the blood curdling shrieks in "Kadaverstille", the deathgrind of "Alpha Antichrist", the industrial sludge of "Tempelfaust", and the entire band becoming The Body for the final track; a lot of these elements were already present on Night Intruder, in slightly different proportions, so hearing the band polish them even further is a treat.

Though all of these various grind sounds merge into a pretty cohesive sound, the short runtime ensures maximum damage for each of them, and make Der Letzte Raum, a satisfyingly violent affair.

Written on 16.11.2022 by
RaduP
Doesn't matter that much to me if you agree with me, as long as you checked the album out.
More reviews by RaduP ››