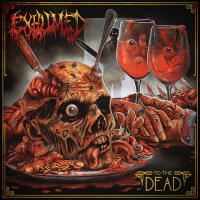 
If you happen to be familiar with the bloodthirsty deathgrind act Exhumed, you should know what to expect from them by now. This is a band that has always provided some solid deathgrind material, with uncanny influences from their more than likely idols Carcass, and this tenth release, To The Dead, is no exception. This is yet another disgustingly good album in their catalogue of blood-soaked releases.

Exhumed hit their career off with a high in 1998 with the sickening, infamous bombshell that was Gore Metal. They've pretty much stuck by that same old deathgrind formula throughout their discography, and why not? It's not a bad formula to go by, after all; this band has remained fairly consistent, releasing decent album after decent album. This is a very impressive feat, considering that they are supposedly a Carcass worshipping act (or at least very close to being). Now, for me personally, they are more than just a simple copycat of one of the biggest and most influential names in extreme metal. They have been one of the best bands in the deathgrind business for some time now, and by the sound of this latest release they will continue to be so.

To The Dead basically follows the same principle as all before it, sticking to the band's traditional deathgrind roots. Once again, there's a superb flow, with very little breathing space between tracks. Their sheer brutal, gore-soaked carnage and ferocious tempo is certainly cranked up right to the max, allowing the non-stop rhythmic drumming to endlessly blast away, along with the chunky melodious riffing that takes the centre stage. Now of course their usual sick and twisted lyrical content is present as always, making the listener want to spew out his/her own guts (a slight exaggeration if you're used to the lyrical content by Cannibal Corpse and the like).

The Carcass influences are evidently clear right from the opening track, "Putrescine and Cadaverine"; it's almost like a throwback to Swansong-era Carcass, with its catchy melodeath grooves, and gnarly, gnashing growls. There are several moments throughout the album in which grabs your attention, the tracks "Rank and Defiled" and "Defecated" are particular highlights for me, with their catchy choruses and memorable grooves and riffs, but in all fairness, the album as a whole runs pretty smoothly, with no track sounding out of place, making the whole album quite an enjoyable listen.

The sound is also back to basics, with the gritty, edgy, and raw sounding production, as opposed to the more refined and polished sound of their previous release Horror. So, maybe this is signalling a return to their early work, particularly Gore Metal and Slaughtercult, which will please many fans, I'm sure.

To The Dead isn't the band's best by any means (Gore Metal likely takes that title for me), nor is it their worst, but it simply does what it's meant to. So if you're happy with Exhumed's grindy and brutal formula, then that's great, because Exhumed are happy with providing this formula to you.