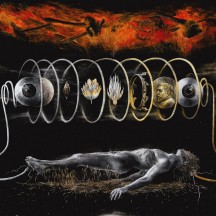 
At the 5-minute mark, the single 25-minute song making up Zoetrope quickly transitions from a staccato string-fuelled cavernous death mayhem into a somehow even intenser bad acid trip of dissonant lead guitar shredding that would make the most inattentive listener jolt straight up from the chair. Oh, there is also piano. Are you ready?

I would not go so far as to call Qrixkuor symphonic death metal at this point, but on the Zoetrope EP they have added a lot of orchestral elements that blend seamlessly with their chaotic brand of music. For a band delighting in making 25-minute long death metal creations, this seems like a natural progression as it builds upon the sense that these are symphonies made up of varying different movements rather than modern “songs”. “Zoetrope (Psychospiritual Sparagmos)” contains no shortage of contrasts: there is the prevalent jarring interplay of brutal, technical death metal and various orchestral elements, ranging from shrieking staccato strings through desolate piano keys to roaring war horns. The orchestral elements are sometimes allowed to take centre stage, such as around the 19-minute mark, where the orchestra makes a sort of doomy Godspeed You! Black Emperor-like entrance; the sound being drenched in symphonic brass work, driving rather than accentuating the metal elements before a guitar arpeggio takes over to put the orchestra in its place again.

It is admittedly pretty hard to keep track of everything going on in Zoetrope at first listen, but the sheer intensity, dramatic mood, and playful interaction between death metal and orchestra are all right there at a first glance. It is not symphonic death metal of the kind that Septicflesh delivers, nor of the kind that Therion used to deliver back in the days, but a kind owing more to the free-flowing, classically inspired, dynamic nature of bands like Imperial Triumphant, even though this album is through-and-through death metal (with a bit of black added for good measure at parts).

There are many highlights on Zoetrope. Around the 3-minute mark, a hissing cacophony erupts into a pounding martial rhythm later to be accentuated by a sort of dissonant-black lead - then the guitar goes full shred mode and eventually settles back into war drums, now accompanied by that serious shred fest. Oh boy, is there a lot of shredding on “Zoetrope (Psychospiritual Sparagmos)”, but it rarely comes off as superfluous, rather appearing only when necessary to turn the chaos up to 11. After 8 minutes, there’s a very ominous break in the music that sounds like getting sucked into a black hole as the song title is repeated in the heavily reverberated growling style that suffuses the entire song. A lonesome piano then enters to carry the song into its second half. As the lecture notes tend to say, finding the rest of the highlights is left as an exercise for the reader.

The performance is flawless all around, the orchestra is very well composed and blends nicely with the metal, the production is somehow both clean and gritty at the same time, but the vocals lack a bit of that extra oomph I would like, reverb-drenched as they are. The music does tend to drag a bit towards the final minutes, and I keep wishing for a wider variety of vocal styles and some more breathing room - but this is mostly a matter of taste. While a few minutes could have been edited out for good measure, it is overall quite impressive how Qrixkuor manage to more or less keep my attention for 25 minutes of technical, symphonic death metal, by having their music be nearly always changing, dynamic, evolving towards another new section. It is only when these parts start to repeat themselves toward the end that I start to lose focus, because much of Zoetrope's strength comes from the “fucking hell, what now?” factor.

Much like the zoetrope the title refers to (and the eye-catching cover art), Zoetrope is a juxtaposition of nightmarish imagery that sometimes comes together only to be torn apart again. Over and over again, for 25 minutes. It’s a wild ride, quite different from Qrixkuor’s previous output what with the orchestral elements, but they add just enough drama and variation for this EP to be all the better off for it. Have a nice sparagmos, everybody.

P.S. What the hell is a qrixkuor, some obscure animal from Madagascar?