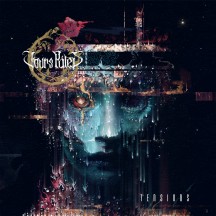 
Most of the comments on this album's stream from a black metal focused YouTube channel are complaining that this is not actually black metal. Contrast that with the fact that we nominated the band's previous (and debut) album in our black metal category for the awards despite having melodic black metal and metalgaze categories.

Credit where credit is due, Jours Pâles' debut, 2021's Éclosion was already the kind of black metal that didn't stick too close to the core sound, incorporating a lot of melodic black metal and its offshoots, from blackgaze, atmospheric black metal, depressive black metal, and especially post-black metal, it was still an album that you could, when hard-pressed, call "black metal". The follow-up, Tensions, is not really a reinvention of sounds, since all the sounds of it were already present on Éclosion (and on the band's predecessor, Asphodèle, whose only album gives the current band its name), but there is still something fundamentally different this time around.

I can kind of get where the commentators are coming from. The post-black metal and melodic black metal and blackgaze sounds all feel like they put a lot more emphasis on the non-black metal side of the sound this time around, with clean vocals and melodies being even more prevalent. Shrieks are still the preferred vocal type, but there are very few moments where it feels like black metal, in a more pure form, is the prevalent sound. You could almost say it's more of a post-metal album than a black metal one, though it's genre-hopping nature is making it hard to simply place it in one camp rather than another. Suffice to say, melodies and atmosphere prevail on Tensions.

The "worst" insult you can throw at black metal music is call it "easy listening", and yet this is what Tensions feels like in the best way possible. Even with its depressive tones and desperate shrieks, it's a very inviting listen. Though Uada's James Sloan seems to have departed the band, the riffage here doesn't degrade, instead creating some jolting melodies and melancholic soundscapes through it. Within its more than one hour runtime, it traverses a lot of ground in terms of mood and emotion, from the more melancholic to the more triumphant, without feeling wildly disparate. Though I feel that even more focus and self-editing would've made the album even more impactful.

As adventurous and Jours Pâles, they're very grounded in what they want to do, even more so than they were on Éclosion.

Written on 09.12.2022 by
RaduP
Doesn't matter that much to me if you agree with me, as long as you checked the album out.
More reviews by RaduP ››