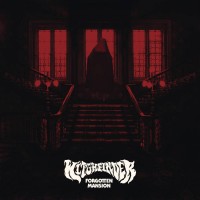 
Now I know there's hundreds of stoner/doom metal bands out there that have been playing this particular style for a hefty span of time, but in recent years French stoner/doom metal act Witchfinder have certainly proven capable of being right up there with the best of them. Here is their third full-length release, Forgotten Mansion, an album that perfectly reminds us metalheads as to why we have been consistently drawn towards this particular genre since the early rising days of the mighty Black Sabbath.

There are many obvious influences to be found in Witchfinder's style, most evidently coming from the likes of Sleep, Monolord, Cathedral, and of course the most noticeable influence of all, early Black Sabbath, with the album Master Of Reality particularly standing out most - but then the same could be said about countless other bands that have chosen to approach this style the same way.

On paper, this band has a perfect recipe for producing some of the finest stoner/doom metal around: on bass and vocals you have Clément Mostefai, who recalls the old Black Sabbath in the best possible way with his haunting, Ozzy-like wailing and deep, earth-shattering bass tones, whilst guitarist Stanislas Franczak provides the classic Iommi-based riff patterns with the very distinctive fuzzy amplified stoner sound. Thomas Dupuy provides his simplistic but rhythmic drumming patterns that work so effectively along with the rest of the instruments, and just to top it off you have Kevyn Raecke, who provides additional keyboard passages that help in creating the gloomy, theatrical, horror-themed soundscape. Going by this principle had certainly worked wonders for Witchfinder during their first two releases, and so all is looking good for this newly formed band of stoned doomers as they come into this third release.

The opening track, "Approaching", kicks the album off in Witchfinder's usual traditional doom manner, along with their usual stoner elements, meaning a relatively simple and heavy doom-based song structure and impressively fuzzy guitar tone. Nothing necessarily out of the ordinary, it would seem; however, the track is very effective, as the sheer heaviness throws you straight into midst of things right from the off, and with a running time of just over eight minutes, it certainly prepares the listener for the heavy, doomy onslaught that remains present throughout the majority of the album.

The second track "Marijuana", has a slightly different approach; it may sound a little cliché, going by the song title at least, but it’s only fitting, as ultimately the track is the most stoner-based track on the album, with its spacey, psychedelic soundscapes. Now let's face it, this is a band that have a track titled "Sexual Intercourse” in their discography, so I guess having a track titled "Marijuana" doesn't sound too bad after all? Aside from the obvious stoner theme behind "Marijuana", the majority of the album is more or less themed around a horror-based setting. I suppose it would be more accurate to say it's centred around horrors involving the occult. Each track follows a similar slow-to-mid-tempo pattern, with your typical heavy sludge riffs and all, but it's the keyboard playing that really stands out for this album, in what would otherwise be, in all honesty, an average stoner/doom release at best, as it develops that all-important strong, creepy atmosphere for its spooky setting.

The album clearly isn't going to win any awards for its lyrical content or inventiveness, but Forgotten Mansion is simply an album for those who like the traditional no-nonsense approach to doom, with the typical stoner metal vibe and heavy sludge riffs. If you're after something a little more experimental and new then you won't find anything of the sort here, I'm afraid, but they certainly do a grand job of providing you with some quality classic doom.