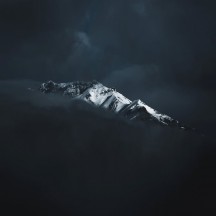 
01. Once More From That Frozen Bottom
02. From The Place Been Erased
03. Until My Wings Turn To Ashes
04. Candlelight In Colossal Darkness


A smaller offering from South Korea's most unique metal export.

There's something about EPs that makes them feel more like extra material or a detour to make sure that it isn't marked as the new album of said artist. Sometimes it's not even about length. I'm pretty sure that if Apparition had another song and was branded as a full length, I wouldn't only find out about its existence a month after its release. Jambinai, though not a top tier band in terms of popularity, are still South Korea's largest metal(ish) export, and 2016's A Hermitage and 2019's Onda have been having quite a bit of press. Barely seeing any for Apparition was odd. And yet, I did find out about it and now I'm writing about it.

At this point, there's very little that is surprising about Jambinai's sound, having polished their Korean-folk infused heavy post-rock sounds for more than a decade, slowly building up from a trio up to their current quintet formation. Now having a dedicated drummer, bassist, and guitarist alongside the four instruments makes the more modern rock sound side of the band feel more pronounced, which is also partly what makes Apparition feel most similar to Onda out of the other Jambinai album, though it's not like sounding most like the previous record is that big of a surprise. In a way, this is an extra serving of that established sound.

What does feel different about Apparition, aside from its shorter runtime, is that the heavier moments feel even closer to post-metal than before. Jambinai has never been really a metal band, with their post-metal sound often closer to a heavier version of post-rock. That's still the case, but the heaviness on the atmosphere of opener "Once More From That Frozen Bottom" or the crescendo of "Until My Wings Turn To Ashes" are tweaked for extra heaviness. Add to that the oddity of them collaborating with K-Pop singer Sunwoojunga and thus being two degrees of separation away from BTS. The EP closes with a live version of "Candlelight in Colossal Darkness", which would be a pretty nice tune if not for that overly loud rooster-sounding instrument.

Aside from the last track, Jambinai continue to show how to blend folk instrumentation into post-rock without overly relying on the gimmick of said instrumentation.

Written on 17.12.2022 by
RaduP
Doesn't matter that much to me if you agree with me, as long as you checked the album out.
More reviews by RaduP ››