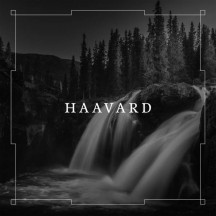 
The songs of the evening paved the way for a splendid dawn.

Haavard should ring a bell to anyone who knows their Norwegian black metal, but even more so to those among us who find deep joy in dark nordic neo-folk. Because Håvard Jørgensen was not only Ulver’s guitarist for the first 5 years of the band’s inception, he was also the key figure behind Ulver’s sophomore record and neo-folk masterpiece, Kveldssanger. On this album, there’s even a track called “Kveldssang II”. It is obvious that Haavard is meant to be a continuation to that sound, but is it also a development? Let’s see about that.

I have played Kveldssanger more times than I care to count. It was a go-to album for many drunken nights with my closest friends while we engaged in faux-philosophical discussions back in my younger years. So all comparisons between Haavard and Kveldssanger pop up immediately to me. For starters, it is obvious that the budget behind Haavard is way bigger. The production is crystal clear and does wonders in elevating each instrument. And, damn, are there instruments here! Haavard’s repertoire of sound palettes is vast yet not excessive. Of course the acoustic guitars take a central role, but the melodies have a wide range. You can point out all the different styles with ease, from the moody sound of the north to more romantic French touches, as well as upbeat Spanish passages and even warm oriental sounds. One could argue that it gives the album a more fragmented identity than Kveldssanger; I think the comparisons should stop there though, as Haavard feels like an album with an entirely different aim. It is more cinematographic and truly brings out a vibe I’ve come to expect from albums labeled as “world music”.

Just as the landscape around you changes with each footstep you take, the moods in Haavard change seamlessly. The instrumentation does reflect that. Yes, it is true. Kveldssanger also featured strings and flutes, but in Haavard, there is more room for the instruments to change and mold themselves depending on the overall tone of each track. Another major difference is that Haavard is almost entirely devoid of vocals, with the exception being “Mot Soleglad”. And who can be a more adequate singer for this album than Garm himself? It’s quite magical hearing how things come full circle.

Despite what my review is leading you to believe, I don’t think it’s fair to compare Haavard and Kveldssanger all that much: I enjoy them for different reasons. While the older brother is more charismatic with its dark and bold hymns, this new work by Håvard Jørgensen won me over with a more delicate and intricate songwriting. Haavard filled a gap I never thought existed.