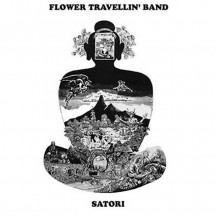 
Japan’s heavy music scene has long been known as a hotbed of progressive adaptation, a reliable incubator of melodic subgenres, and a launchpad for flagitious idiosyncrasy and anthemic loudness alike. But what many fans are not aware of is that Japan’s history with metal goes back nearly as far as that of the genre itself.

In fact, the first connection was made almost instantaneously, by analogue standards: a mere eight months after the release of Black Sabbath, Flower Travellin' Band recorded a cover of the title track on their debut album, Anywhere. Anywhere was itself nothing particularly revolutionary: a covers album focused on Western blues and psychedelia, a somewhat bohemian reinterpretation of sounds filtering into Japan through foreign popular music exports. But a mere six-month wait was all it took to deliver Japan’s very first heavy metal album, and Flower Travellin&rsquo; Band’s deep infatuation with improvisation, experimentation, and unconventional styles resulted in that album being a singularly entrancing and forward-thinking work even to this day.

Satori’s roots extend as far as its reputation now does: its beginnings lie in Flower Travellin' Band’s earlier incarnations as a practitioner of “group sounds,” a band-oriented amalgam of rock’n’roll, blues, Western folk, and psychedelia that stemmed from the explosive popularity of (who else?) The Beatles and their contemporaries. Already this indiscriminate appreciation for artistic fusion yields noticeable quirks in the development of an early hard rock foundation; add to that the facts that members of Flower Travellin' Band had previously gained notoriety for backing a jazz trumpeter, guitarist Hideki Ishima was enraptured by Indian folk music, and the band had a basic consciousness of traditional styles of Japanese music, and you’ve got a much richer assortment of sounds combining into this early work of heavy metal than the standard “blues but louder” formula.

Those eccentric experiences, at their most basic level of coalescence, make Satori feel structureless: while foreign releases broke up the album into more discrete tracks, the original version of the album features only five segments, each labeled “Satori,” and the suggestion that this entire album is one continually evolving work is very easy to believe. Even with certain discinctive elements that drastically change the mood and volume of the album throughout, the many segments feel like part of a great journey, a curious and wandering travail through the edges of musical convention. The album is relatively scant of lyrics, with vocalist Joe Yamanaka sometimes resorting to nonverbal vocalizations to carry melodies, and much of Satori is purely instrumental; recorded in only two days, the album reflects a songwriting mentality learned from hippie jam bands and indulges frequently in the musical talents of its instrumentalists. Most noteworthy is Ishima’s guitar-playing, modeled heavily after the discipline of the sitar and, through some combination of effects, often rendered nearly indistinguishable from the reedy sound of the pungi; he slides across tones and down scales largely unfamiliar to Western and Japanese music alike, adding emphasis to the chunky doom-blues chants with fiery accentuations. Compare The Beatles’ “Love You To” for a similar application of an actual sitar, but the overdrive compelling Ishima’s leads, the crunch of the rhythm section, and Yamanaka’s high-pitched wailing make Satori an entirely different beast from FTB’s peace-professing forebears.

Satori is, after all, an early example of heavy metal. The album opens with a wordless shriek and a crushing, sour groan of a riff: the ugly, eerie whining of that opening motif exhibits clear influence from Black Sabbath, though as much as their infamous debut, hints of the yet-to-be-released Sabbath Bloody Sabbath glimmer within the aching doom. It’s also impossible not to hear palpable similarities to Sigh’s early black metal: these riffs are written all over Scorn Defeat and ever onward. As the album progresses, it ventures into more familiar contemporary territory, with harmonica solos, screaming guitar breaks, and enveloping meditations calling to mind other prog, hard rock, and blues stalwarts of that era; at times, Flower Travellin' Band is more Allman Brothers than evil. Inevitably, however, Satori circles back to that peculiar, nightmarish quality that overshoots psychedelia and lands square in tense, malevolent doom, with “Part I” and “Part III” being the major innovators in musical villainy – even the less overtly voluminous passages possess a clipped urgency and traditionally influenced eeriness now recognizable as something entirely different from the old group sounds label. And much like Black Sabbath themselves, it’s that totally novel understanding of darkness that made Flower Travellin' Band an innovator: not just distortion, not just new heaviness, not just increased volume, but a whole shift in purpose that we now see as aligned with heavy metal.

While Flower Travellin' Band put out several other worthwhile albums during their initial period of productivity in the early ‘70s, Satori is the only one that carries itself with such prescient intensity; it would be a matter of years before the next recording that could be considered a Japanese metal album, which only underscores just how ahead of its time this album was. And even after so many decades of metal getting louder, heavier, and more wicked, there are not too many bands that could match the snaking fluidity of Satori’s loose fusion and instrumental envelopment.