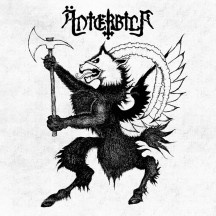 
How about some folk-black riffs that sound as if they were based on ancient key harp melodies? How, then, about a punk attitude to top the folk off? Änterbila has got you covered. Änterbila (Boarding Axe) is the debut album by the Swedish band of the same name. After a haunting key harp intro (courtesy of guest musician Thomas von Wachenfeldt), which reminds me of how beautiful Swedish folk music can be, “Hemlängtan” (Homesickness) kicks off with a mostly one-note tremolo riff, martial drums, menacing bass tone, and spiteful if somewhat subdued black metal rasps. It soon progresses into a fantastically catchy and ominous main motif which leaves me at a lack for words to describe properly - it’s really as if a lonely key harp in the darkness of the woods got hold of amps and cabinets and resounded an overdriven Scandinavian lament throughout the desolate forests and fields. It then devolves into a sort of post-black passage with a man mumbling about how nobody will finish your work for you when you are dead, before the main motif and chorus returns to finish up the song. It is an intriguing blend of styles on display here, which had me hooked from the start.


Änterbila’s themes revolve around the terrible, violent, and uncertain way of life in Sweden during older times, when war and famine regularly plagued the country, and we had none of the cosy comforts of today to get us through the long, dark winters. The kings and the church exploit and starve the common folk, and there is no freedom nor salvation in sight for the protagonist here; he is completely at the mercy of his overlords and forced to farm ground that yields little to no crops, most of which are then taken from him as taxes. The lyrical content backs up the musical themes nicely. I am at a bit of a loss for references here; even though Änterbila is pure folk black metal, it has a quite original sound. The closest point of comparison I can think of is probably Dödsrit, but it is best you take a listen for yourself, and maybe you will have better luck with your Dropping Ov Names than I do.

I can, of course, describe the music for you (that is kind of what I am here for, right?): Änterbila seems to draw inspiration from actual ancient folk melodies for most of their melodic riffs, such as the splendid aforementioned earworm of “Hemlängtan” and the powerlifting main riff of “Torparens Dotter” (The Homesteader’s Daughter). The verses are mostly supported by simple yet effective three-to-four-chord riffs which always progress nicely into the chorus parts, and some songs utilise a lot of very simple one-or-two-note tremolo patterns which builds tension. The choruses work very well to set a unique identity to each of the songs: “Södermanland” (the Swedish province south of Stockholm) and “Vita Piskan” (The White Whip) both have a hardcore punk attitude and use gang shouts to mostly good effect (sometimes to the point of slightly abusing them, but it is no big deal) while “Torparens Dotter” and “Äntergast” (Boarding Ghast) use a more recognisable Viking metal riffing style. Except for the intro song, there are no folk instruments to be found here.

One thing you will notice right off the bat is the very DIY production on Änterbila. Perhaps this is also part of the reason why the album exudes such a punk attitude. It is not a bad production job by any means; maybe the drums and guitars are a bit on the thin side, but on the other hand this allows the bass (which I wish had some more attack to it) to take a bigger place, being always very audible. The performances at first came off as somewhat sloppy to me, but I quickly got used to it and realised this DIY aspect is what gives the album much of its charm, and makes it sound like a lot of love was put into creating it.


Änterbila is a charming, promising debut album which showcases just enough of an original take on the genre to feel like it is not just another folk black album, thanks to the thematic lyrics, haunting melodies, and punk-tinged swagger. A band to keep an eye on, for sure. Big thanks to Nejde for another great recommendation!