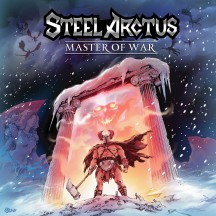 
It only takes a few seconds for me to know whether I will enjoy an album or not. The cover art and the lead guitar in the beginning of the opening title track of Master Of War were enough to convince me that I was in for an epic adventure in storytelling and metal music.

Steel Arctus’s music is influenced by early Queensrÿche, Manowar, Savatage, and Crimson Glory. But they have a sound of their own and some really top-tier compositions for the style, crafted by guitarist Nash G. Master Of War is both heroic and arcane, and creates a thoroughly immersive journey for the listener through the music, the lyrics, and the general atmosphere. It is vigorous and melodic throughout, and it is versatile enough to put back to back in the track sequence the blazing “God Of Fire” with its wails and lightning speed, and the folky “Cry For Redemption” with its whistles and bagpipes.

But that’s not all.

There are thundering riffs competing with empowering melodies. The bass and the drums are fuelling the battle. The keyboards add depth and theatricality without ever overflowing the songs. And all the songs are catchy with grand choruses and soaring vocals by Tasos Lazaris, who sounds like a mix of Geoff Tate and Daniel Heiman. Yes, he’s that good.

According to Nash G., the lyrics basically tell the story of Steel Arctus (the main character) and his world. In the band’s first album, Fire And Blood, the theme was the attack by the forces of evil against the small village of the hero’s hometown, somewhere in the mountains of Pindos. He was guarding a bridge that also symbolized the secret passage to other mythical dimensions, and to other spaces and times. But he lost the fight and the woman he loved, the Arcadian Lady. In Master Of War, following the prophecy of the Necromancer, he descends to Hades and is armed with the unbeatable shield that was given to him by the God of Fire. There, in the Underworld, he is fighting and searching for the Arcadian Lady, but also finds himself on a journey of self-discovery with secret riddles and sudden twists. The story will hopefully continue in the records to come.

This is not some pretentious, pseudo-retro, epic power metal release. It is a pure and honest offering of arctic steel, full of chest-filling, fist-raising anthems. It is robust and undiluted. No matter which interesting and innovative directions metal has branched out to (and will hopefully continue to do so in the future), for me, this kind of metal remains immortal. And, since it is the end of the year, I can now confidently say that Master Of War is my favourite metal release from my own country for 2022.