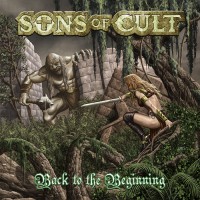 
If you're a fan of traditional heavy metal and in need of something to lift your wintry blues, then here's a real headbanger's delight that will surely do just that!

Welcome to the new Spanish heavy metallers Sons Of Cult, introducing their fine debut album to us Back To The Beginning. This band only formed back in the recent year of 2021, despite playing like heavy metal veterans themselves. The way to best describe this band is that they play with a no-nonsense, solid traditional heavy metal approach; it's almost as if they had been trapped in some kind of time capsule dating back to the 80s, only for their music to be released before us now.

Now there's nothing original or out of the ordinary from these folks; they may keep things simple but the band is certainly no gimmick. There is still plenty of headbangable material to be enjoyed throughout this album, from the outrageous groovy riff melodies, to the impressive lead guitar solos, and from the catchy songwriting to the powerful vocals. It's clear that Sons Of Cult have taken inspiration from the likes of Judas Priest, Iron Maiden, Saxon and AC/DC, but what is unclear to me is which band had inspired them most of all. Each song contains several noticeable influences taken from each of those bands mentioned.

The album kicks off with "The Fighter", a song that could easily be considered a classic heavy metal anthem, with its highly addictive riff melodies and catchy chorus harking back to the golden era of the NWOBHM. Their old-school energy only continues to surge through the rest of the ten tracks, exciting us with many more memorable choruses and catchy riffs; however, there is also a Michael Schenker Group cover, "Desert Song", a pleasant hidden track at the end of the album's playlist. A key factor for me is Jaume Vilanova's singing style; his vocals have an interesting distinctive deep raspy sound, very similar to that of Manilla Road, but there is also a distorted grunge effect present giving them that extra oomph.

I understand the song titles aren't the sharpest; they do sound a little cliché I admit. I mean, titles such as "The Power Of Music", "I Don't Care" and "I Wanna Go Out" might make you dubious about what to expect, but don't let them put you off completely; this isn't as soppy or generic as they might suggest.

Back To The Beginning is not original in the slightest, but it's everything I admire about heavy metal; it's simplistic, but it's a real headbanger.