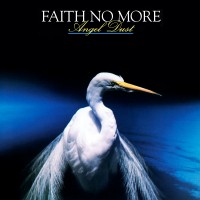 
Not to be confused with pixie dust.

I've been getting so many questions of late: "Omne, where have you been lately?", "Omne, why don't don't you review old albums like you used to?" and "what’s the difference between Dubai and Abu Dhabi? The people in Dubai don’t like the Flintstones but the people in Abu Dhabi do". Well, rest assured metalheads, I'm back from my holidays and decided to kick off the year with an album that is a stone cold classic; Faith No More's follow-up to the hit single "Epic", Angel Dust.

Infamously, the band's members were advised not to buy a house when they turned this album over to the record company, in the belief this album would be commercial suicide. Well, while it is nearly as anti-music as you can get this side of Strapping Young Lad and Protest The Hero, you can easily make sense and, most of all, be entertained by the music presented here.

From Mike Patton's unique and varied vocal phrasing, to his... odd lyrics (I don't know how you're supposed to "suck ingenuity down through the family tree", but I do know I won't be googling it without incognito mode on either), through to Bordin's off-kilter but hypnotic rhythms, and all the strange and eclectic samples thrown in in-between: Angel Dust has it all.

One of the first questions likely to be on your mind will be "how do you make an album feel like a cohesive unit when it contains such disparate elements?", from the gentle "Midnight Cowboy" to the avant-garde "Kindergarten" and the heavy-as-hell "Malpractice"? Well, Andy Wallace found a way. With each and every piece of the puzzle being put in the right place, the bigger picture is easily visible and somehow, makes perfect sense.

Wallace is aided in his efforts thanks to the collective and individual talents of all involved, with each member of Faith No More pulling their own weight and then some. From the opening "Land Of Sunshine", you'll know you're in for something different; it may not make sense upon first outings, yet it gets its hooks under your skin and you feel compelled to carry on further through the album. Perhaps it's the undervalued bass playing of Bill Gould (honestly, how he hasn't gotten more awards and recognition I'll never know), or the drum patterns of Bordin (see "Caffeine") that draw you in; either way, you're in for a wild ride.

If I did have to cherry-pick highlights from the album then I would have to plump for "Midlife Crisis" (thanks to Grand Theft Auto, you may have heard this one before), "Crack Hitler" and, perhaps the band's best effort overall, the sprawling mini-epic "Everything's Ruined", a track that seemingly only makes more sense as time goes on. Angel Dust is unique in that, ask different people for their favourite track off of the album and you will likely get several different answers, with each song being strong enough to warrant selection. If that isn't a sign of quality then I don't know what is.

If you are looking for an album that is both a palette cleanser and one that paints a picture using a palette all of its own, then look no further than this. Angel Dust is an island all of its own, even in the sea of alternative music that was the early 90's, a uniquely crafted album that is the musicial definition of eclectic.

Written on 07.01.2023 by
omne metallum
Just because I don't care doesn't mean I'm not listening.
More reviews by omne metallum ››