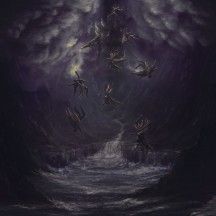 
Liber Lvcifer II - Mahapralaya comes almost nine years after its predecessor, Liber Lvcifer I: Khem Sedjet, and it has surely been quite a long interval. According to Thy Darkened Shade, this was their “most difficult-to-be-made album to date”, but I can guarantee you that it was worth both the effort and the wait.

My last encounter with Thy Darkened Shade was in 2021 through their contribution on the fantastic split SamaeLilith: A Conjunction Of The Fireborn, which I briefly presented here, but I have been an admirer since the beginning. The band and its mastermind, Semjaza, have an austere and very clearly defined mindset towards what constitutes true black metal, and why this music should be dedicated to the Left Hand Path. Liber Lvcifer II - Mahapralaya is “exploring the concept of Lucifer’s manifestations through religions once more, through real occult practice and experience”. And indeed, the songs here are hymns… they are invocations; they are bathed in Luciferian light and shrouded in Satanic darkness. This is not a subject that I claim to fully grasp or to have an extensive knowledge of, but listening to Liber Lvcifer II definitely feels like spiritual liberation.

Musically, the album is progressive and labyrinthine, ritualistic and adversarial. There is an underlying influence of classic heavy (and even epic/Viking) metal in the melodies that make an interesting contrast with the dissonant and more aggressive riffs, and the bass often has a prominent role similar to the one Steve Harris gives it in Iron Maiden. Moreover, I should not fail to mention that the sound of the album is absolutely engrossing. Mixed and mastered by V. Santura (Dark Fortress, Triptykon) and Semjaza himself, Liber Lvcifer II is a perfect-sounding black metal release, undoubtedly driven by the dark metal forces that surfaced in the ‘80s and the ‘90s. It creates a fully immersive and occult atmosphere, without having been recorded through a cheap headset. The latter method served Burzum really well back in the day, but it doesn’t have to be like this today, and the clarity of the instruments here in no way harms the cvltness or the blackness. This is undiluted, pure, and rebellious black metal that sticks to the roots, while still being innovative and expansive. It blends chaotic dissonance and evil melody with great success, while drawing subtle influences from classical music, neofolk, dark ambient, and even jazz (again, pay attention to that bass).

The musicianship and songwriting ability that Thy Darkened Shade exhibit are both beyond impressive. The hymns are long (only two of them don’t go past the six-minute mark) but do not feel long at all and have a natural flow. The guitars are sinister and communicate apocryphal black metal passion along with the imposing bass, the drumming -courtesy of HG (Hannes Grossman?)- is unrelenting and technical, and the vocals (provided by The A, Semjaza, and Herc) are superbly varied and versatile, ranging from possessed and malevolent to ceremonial and chanting. One thing I more and more find off-putting in modern black metal are the vocals that are often these ridiculous-sounding, old witch-like shrieks, but here there is a plethora of different vocal ideas and arrangements, adding to the aim and the atmosphere of the album. It took many years for this album to be released, but I guess this was the price to pay for such remarkable attention to detail.

Like every Thy Darkened Shade release, Liber Lvcifer II - Mahapralaya is a spiritual challenge. It is a one hour-long black mass. I do not expect everyone to dive deep into the lyrics or the artwork, because a lot of people nowadays approach music somewhat superficially, but I do expect everyone to be affected by all the non-musical elements of it, at least on an unconscious level. In any case, the music itself and the atmosphere this album creates is enough for a transcendent black metal experience.