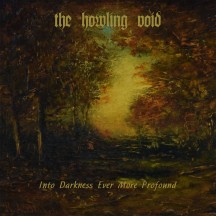 
Funeral doom is a pretty hard genre to get into, with its lethargic paces and long-form songwriting. A lot of the funeral doom I've found the most engaging were the ones that made it crushing and sprinkled it with black or death doom metal. But The Howling Void go on a completely different route.

The Howling Void is far from being a newcomer. Being a one-man band project of Ryan Wilson, who has been active, either as a member or the sole member, in bands as varied as the goregrind Intestinal Disgorge, the black metal Hordes Of The Morning Star, the blackened death Pneuma Hagion, the gothy post-punk Executioner&#039;s Mask, he's certainly a man of many talents and styles. Given the extreme nature of a lot of Ryan's projects, one would expect his main funeral doom outing to focus on the extreme side of the genre too, a route that has already been explored by many funeral doom bands. But The Howling Void explores the lighter side of the genre.

The Howling Void has been putting out music since 2009, and its very sorrowful and melancholic tones have been consistent since. The biggest changes in the trajectory came when more and more folk elements were added in the mix, culminating in 2016's The Triumph of Ruin and 2017's The Darkness at the Edge of Dawn, likely my favorite duo of albums from the project. For some reason or another, the project did a course correction back to their previous sound on 2019's Bleak And Everlasting, and that's a sound that is continued on Into Darkness Ever More Profound as well. Granted, even without the clean vocals and the folk passages of the mid-era, the sound here is far from the usual for funeral doom, instead opting to take the glacial paces towards something with more symphonic grandeur. It's morose and lethargic as one can expect from funeral doom, which means that it's still quite inaccessible, but the tones aim for something more beautiful.

Not only are the guitar tones themselves lighter, but everything is washed in melodic synths, with some occasional extra orchestration and choirs to drive the symphonic point home. The vocals are fittingly only in the very deep and monotonous growls area, but they feel like they have more of a support function in the music, with most of the heavy lifting being done by the interplay between the guitar melodies and the synth melodies, providing a melancholic but bittersweet atmosphere to the album. The album is split up in four songs, with only the last of the bunch being under ten minutes, but the runtime of the album being at a digestible 45 minutes makes it not feel like a chore to get through. The very melodic aspect of the album does its part to make up for the lack of variance in pace, but even with its qualities, Into Darkness Ever More Profound relies a lot, like most funeral doom, on being able to immerse the listener. Be immersed, and it's a beautiful walk in the woods. Be distant, and it's a tedious task, albeit a much lighter one.

There are few bands out there who can tap into funeral doom's beauty the way The Howling Void does. Even fully embracing funeral doom's drawbacks, the band still makes the most engaging lethargic music out there.

Written on 09.01.2023 by
RaduP
Doesn't matter that much to me if you agree with me, as long as you checked the album out.
More reviews by RaduP ››