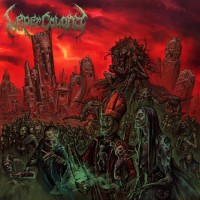 
There are musicians out there that are busy, and then there’s those out there that are very busy. There’s a special tier above all of them for the guys that leave you baffled that they’re even capable of finding the time to be involved with all of their musical projects, and Roger “Rogga” Johansson is the patron saint of these people.

To start with, just look at that musician profile and try to get your jaw off the floor. It’s not just the fact that Johansson has had over 50 separate music projects by now (and that’s just going by the ones that we have profiles for in our database), but how many of them are springing up together; if our database is accurate, in 2021 alone he formed 6 bands, and all of them have released albums (at least theoretically; good luck finding somewhere to listen to Battle Axis - Bones Of The Aggressor online). Now, consider that most of these albums are within the realm of death metal, and add onto that the fact that Johansson has been in a myriad of death metal bands before 2021, most notably Paganizer, Ribspreader and Revolting. Now, let’s take a step back: how many death metal riffs is it possible for one person to come up with in a lifetime, and is Johansson at risk of reaching that limit? With that in mind, welcome to Leper Colony, the most recent death metal band set up by Rogga Johansson.

Of note, the self-titled debut album of this project, which also features ex-Morgoth vocalist Mark Grewe and equally musically widespread drummer Jon Skäre, is being released courtesy of Transcending Obscurity Records, a pretty major label for a debut record, and certainly one far more reputable than any label the 2021 projects found their way onto. I have a lot of time for Transcending Obscurity, and even if the fusion of Johansson and Grewe caused some intrigue, I would doubt that the label would commit so early to what is ultimately one in a seemingly never-ending conveyer belt of Johansson projects if there hadn’t been something else tempting them. As such, I’ve listened to Leper Colony a few times by now, and, well, it’s not going to set the world alight, but maybe there’s something here that makes it slightly more than just another project.

I very recently reviewed the debut of post-metal band KOLLAPS\E, and inferred that few things in metal excite me less than a modern day retro-OSDM or retro-thrash album. One smart thing that Leper Colony has done is to not be a retro-death or retro-thrash album, but something halfway in between. It’s been a long time since I’ve come across the genre tag ‘deathrash’, but it feels more relevant to this album than most I’ve heard in recent memory. On the one hand, the production, the vocals, the guitar tones, the little tech flourishes such as on “The Surgical Undeadvours”... these all belong to the realm of 90s death metal. At the same time, it’s really hard to listen to these riffs and these vocal phrasings and these song structures and not feel like thrash from the Slayer-inspired extreme of the spectrum is not a major influence here. As a combination, it’s the kind of mixture that leaves an album open to appealing to a lot of people while still offering the tiniest smidge of novelty, and Leper Colony are somewhat well placed to capitalize on this.

Ultimately, when perusing recent records from Johansson projects, I do struggle to shake the feeling that there is only so much to be done in one genre, and that the same person attempting it over and over again only expediates the process, so when I listen to the first few songs of Leper Colony, the musical and production competency is ultimately outweighed by the absolute absence of originality or noteworthy ideas that I can regonize in them. At the same time, when I reviewed KOLLAPS\E’s album, I recognized that most people have their certain genres that they are happy to hear ideas repeated in, as long as they’re repeated competently, and Leper Colony ultimately accomplish that, with some decent riffs, tempo changes, and drive on songs such as “The Human Paradox” and “Tar And Feathers”. They’re thoroughly generic, but they’re at the very least adequate.

What did susprise me a bit with Leper Colony, however, was that it did manage to offer a certain something later on that shook off a bit of my complacency. The real turning point is the title track; a radical tempo shift for a slower, doomier, more sinister introduction earlier on is a solid platform for a very well-crafted mid-tempo track with satisfying lead guitar melodies and atmosphere, one that reliably sustains interest despite its very stable and steady central percussive rhythm. This change of pace, even if confined to one song, leaves listeners amply refreshed to dig into the frenetic thrashing riffs, shredding solos and death metal aggression within the brief yet blistering closing trio of songs.

In the grand scheme of things, I don’t think Leper Colony is the most remarkable of albums; it draws from two genres rather than one, but it is heavily derivative of both, and it’s not like both genres haven’t already been heavily derived from. Additionally, the delivering of this deathrash style is very competent and well-produced, but not necessarily resulting in modern-day classic songs. At the same time, I have to respect the fact that Johansson has made dozens of albums in this or other very similar veins across his career, and when placed with sole riff duties as combined guitarist and bassist, he’s managed to throw enough into this debut record to fight off the kind of overwhelming sense of staleness that it should bring (certainly, it arouses a lingering interest in OSDM in me that a certain other recent big-name release singularly failed to accomplish). With a promising debut, a commendable musician line-up and a strong label on their side, perhaps Leper Colony is a project that Johansson should consider focusing on rather than finding a whole new band of musicians to plunder death metal with; however, if consolidation was ever of interest to Rogga, I have to assume that it would have already happened by now.

Written on 18.01.2023 by
musclassia
Hey chief let's talk why not
More reviews by musclassia ››