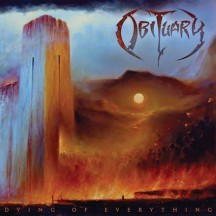 The new year has only just begun and Obituary are already writing the... obituary for the year. Still, despite how glum and hopeless the world seems right now, at least you have a kick-ass soundtrack to go with it, thanks to Dying Of Everything.

Perhaps the greatest death metal band ever, Obituary have long honed a classic sound that is as instantly powerful as it is recognizable, spawning many imitators who never quite get it right. While the band's output has been patchy since the 90s, Dying Of Everything is one of the better records they have put their name to, though one that still has its flaws. Dying Of Everything does try to give itself a unique identity in the band's discography through its production, giving fans a new twist on the same formula.

Dying Of Everything is a misnomer if there ever was one, with the band's performance and songwriting feeling more alive than it has since Inked In Blood. "Barely Alive" blasts out of the gate from the off, before handing the baton over to Peres and Andrews to present a riff so catchy I want it hooked up to my veins with "The Wrong Time". Not to be outdone, D.Tardy makes the sprawling "My Will To Live" his own, with his thundering drums being showcased on this cracker. The other two highlights "Weaponise The Hate" (cliché title, but not a clichéd track) and "Torn Apart" (which sounds so old school, I had to check to see if it was a re-recorded track from the band's earlier work) see John Tardy make his case for being the best singer in the genre.

While I think the album's sound gives Dying Of Everything a unique and raw flavour, I can see the production not being to everyone's liking; the stripped-back and unpolished nature adds a punk-esque visceral bite at the expense of refined power. While this 'live in the studio' feel is probably one of the best of its kind (many bands attempt this sound but usually fall on their face), it is an acquired taste that may be equally as off-putting as it is alluring for sections of listeners.

While the production may give them a uniqueness, there are several tracks on here that just sound like generic mid-tier Obituary songs, with the likes of "Without A Conscience", "War" and "By The Dawn" carrying on the mis-steps of 2017's Obituary and lacking any spark to proceedings. These three tracks, however, are passable, if unremarkable, unlike the closing "Be Warned", which is a title that should be heeded by listeners, owing to its few ideas being stretched way too thin over the five-minute runtime. While the latter is the only track I'd avoid, the prior three do detract from the overall quality of the album.

There are worse ways to ring in the new year than listening to Dying Of Everything; it may not inspire much faith in humanity, but it does set the bar for what is to come in the next twelve months.

Written on 13.01.2023 by
omne metallum
Just because I don't care doesn't mean I'm not listening.
More reviews by omne metallum ››