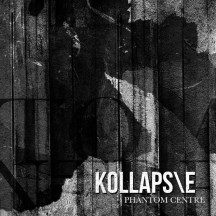 Once upon a time, they went by the name Eye In The Sky, but 2018 saw a rebranding of this Helsingborg 4-piece into KOLLAPS\E, a name under which they have been steadily releasing snippets of material over the subsequent few years. One of those releases was The Pandemic Sessions, a 2-song EP that I covered in the March 2021 edition of Clandestine Cuts. It was a very decent pair of tracks, but admittedly a pair with about as much stylistic innovation as that imaginative EP title would suggest. Heavy and brooding in the manner of early Cult Of Luna or fellow Swedes Gloson, it nevertheless very effectively scratched the post-metal itch. Five years after the name change, KOLLAPS\E have become the latest Clandestine Cuts feature to graduate to a full-length album.

Anyone who has been following this band closely will recognize that 3 of the 7 tracks on Phantom Centre have already been released; “Radiant//Static” and “Murrain” were the 2 songs on The Pandemic Sessions, while “Era” dropped as a single in July 2022. Perhaps smartly, these three songs bookend Phantom Centre, ensuring that at least the main body of the album is guaranteed to be fresh to listeners. It is one of those 4 new songs that is the clear highlight of Phantom Centre; KOLLAPS\E are frequently willing to move away from sludgy heaviness into quieter passages (you can’t have post-metal without them), but it is the record’s longest song, “Uhtceare”, that represents the biggest tonal departure on the album. Smartly leaving the classic post-metal vocal barks by the wayside for an instrumental-only experience on this track, KOLLAPS\E serve up a sumptuously melancholic experience, with plenty of sorrowful guitar melodies and evocative chord choices.

It's a beautiful sequence of music on the record, and it is very much necessary, as there is scant variety in either tone or style outside of “Uhtceare” on Phantom Centre. In 6 of 7 tracks, you’re largely dealing with grim, chunky mid-tempo riffing; there’s variation in the drum patterns to bring about shifts into more ‘marching into war’ vibes, and some of the riffing can be a bit more jagged, but it’s not the broadest range, and the quieter passages, while subdued, barely deviate from the overall atmosphere of the record. “Bränt Barn Skyr Elden” is entirely ambient during its first half, but it’s a malevolent ambience that segues naturally into a typically dark second half.

Ultimately, what you get out of Phantom Centre will come down entirely to your enjoyment of generic post-metal, as this album provides neither innovation nor exceptionalism in its writing; when I first started writing this review, the album had been rated 5 times on the website, and all of them a 7/10, which about perfectly encapsulated the level of the album. However, everyone has their own genres that they can never get enough of, and while I would rather pull teeth than sit through yet another NWOBHM/retro-thrash/OSDM worship album from a new band, I can derive far more enjoyment from uninventive post-metal, so long as it is made well, and Phantom Centre makes up for a lack of originality with a very high level of competency. These songs have a powerful misanthropic atmosphere to them, with fiery atmo-sludge riffs, satisfying transitions, and well-paced musical lulls. Highlights outside of “Uhtceare” include the moody opener “Era”, the densely atmospheric “Beautiful Desolate” and its tom work in the soft build, and “Anaemia” for its very gratifying extended introduction.

The only real slight hint of amateurism arguably comes in the sudden shift in production quality from “Bränt Barn Skyr Elden” to “Radiant//Static”; by their very nature, the tracks from The Pandemic Sessions were recorded in a different period to the other 5 songs here, and there is a notable discrepancy in the production of them. It’s not that the last two songs sound worse necessarily, but they sound different, and while it’s nowhere near as distracting as the sudden jumps in audio quality between tracks on a certain other album I reviewed recently, it’s still noticeable. Beyond that, though, this is quintessential meat-and-potatoes post-metal; if that sounds like your idea of hell, there is no reason to listen to this record, but if you’re as smitten with the genre as I am, you’ll most likely get some enjoyment out of Phantom Centre, and the song “Uhtceare” in particular.

Written on 16.01.2023 by
musclassia
Hey chief let's talk why not
More reviews by musclassia ››