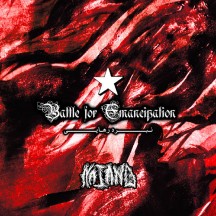 
A couple of days ago, an esteemed colleague of mine said when reviewing the latest Rye album that “lot of where my gripes lie with Всё lie within the production”. Here’s a solution for you, Radu; give a few minutes of Najand’s latest album a blast, and suddenly Всё will sound absolutely fine to your ears.

It came up in recent conversation on the site that most of the reviews we host on the site are skewed towards the positive end of the feedback spectrum, which is an inevitable consequence of us being purely voluntary reviewers and therefore prioritizing what free time we have for Metal Storm to the purposes of promoting music we feel deserves it. However, there is merit to discussing less accomplished music in order to more fully appreciate what the best albums do right, and to that end I’ve set myself the challenge this year to spend a bit more time discussing albums that haven’t impressed me (which I’m sure is a great way to make friends in the metal community). The question then is: how do you go about intentionally choosing albums to write negatively about?

Now, it could be very mean-spirited to take an album from an underground solo musician who clearly doesn’t have unfettered access to elite recording set-ups and go out of one's way to critique it, particularly one that comes from a region that, as I touched upon in my Ryth review, isn’t the most conducive to making metal. As such, when I first saw that Najand was from Iran, I felt it necessary to give a lot of leeway to the production; however, from what I can see, the one man behind the band Sam Yazdian has relocated to Canada, in which case, it might be fruitful to try and achieve some kind of upgrade in production values, because the sound of Battle For Emancipation is lo-fi even when compared to something like Transilvanian Hunger.

The issues with the production lie not just with the inherent rawness, but also the mixing, which varies significantly between individual tracks, and which also struggles to make all instruments heard; the vocals in particular have a habit of drowning out the guitars. It’s a combination that makes the album immediately something of a challenge to engage with, and those issues are only compounded by the hefty 69-minute runtime of Battle For Emancipation. There are times when it's less distracting; the most blackened songs here are unsurprisingly those most suited for such a raw sound (“The Committee Of Death” and “Shine Of The Light” are decent examples of this), while the non-distorted sounds come through comparatively cleanly, such as on the dungeon synth cut “Battle For Emancipation Of The Masses”.

It would nice to be able to say that this is a rough diamond of a record undermined by a lack of production resources, but unfortunately the amateur nature of the production is echoed in the music. The 69 minutes of Battle For Emancipation are comprised of a whopping 27 songs, and there’s quite a bit of stylistic variety across those tracks, with the knock-on effect that not only the production but the music feels inconsistent and haphazard across the runtime. Within the first few songs, you jump from thrash, to black, to sludge, and even to more trad heavy sounds, with little time spent in each new setting before moving onto the next one, and certain styles suffer far more from the lo-fi production than others.

It's a difficult task to spread oneself so wide stylistically and consistently deliver strong songs, and unfortunately the majority of the tracks featured here are lacking in this regard. There are some nice elements to be heard on and off through the album, including the flashy solo in “The Revolution Timespan”, the bass melodies in “The Silent Army”, and a decent couple of riffs in “Reactionary System”. Also, I can appreciate the flirtations with cleaner sounds such as acoustic guitars and piano on occasional songs, as well as the dabblings with spoken word and choirs. However, the reality is that most songs feature rudimentary riffs for the given style that they’re dabbling in, and the short length of most of them means that there’s very little opportunity to take the core of a song into a more interesting direction before it’s over. Additionally, in the very rare attempts at taking a song longer, most notably on the 6 minutes of “The Flight Of Screams”, what attempts there are at shifting gears don’t come naturally, with some changes within songs as sudden as those between neighbouring tracks.

Battle For Emancipation is but the latest of many records released under the Najand name across nearly 20 years, so one can only assume that Yazdian is firmly committed to their current approach to music creation, whether due to practical necessity or genuine preference. However, even if it is not viable to obtain a more polished sound, there are some fundamentals that future records would benefit from tackling, including consistency in production across a tracklist, greater stability in style, and writing fewer but more deliberately crafted songs. As it is, Battle For Emancipation is borderline unlistenable, let alone at $16 per digital copy.