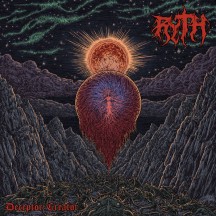 
A representative of the latest new country that I’ve reviewed an album from, Ryth hail from Bahrain in the Middle East. Formed in 2008, it has taken nearly 14 years for them to release their first record, apparently due to difficulties in making metal in the Middle East (which other bands from the region can attest to). There’s no correlation between the time it takes to make a record and the quality of it (which other albums can attest to), but Ryth have had a long time to perfect this record.

The second part of my quadrilogy of proggy extreme metal reviews this yuletide, Deceptor Creator is notably further away from prog than Anomaly’s Somewhere Within The Pines, with death metal very much at the record’s core. It’s not a cavernous or old-school form of death metal, however; a groovy, sometimes almost alt-leaning stomping base is frequently accentuated by ventures into more technical and blackened waters, while the exciting guitar solos and certain riffs bring a more melodic flavour into the mix. Capping it all off are semi-frequent progressive detours into calmer environs, in which the progressive influences of the band start to shine through.

That’s a very promising mix of styles that Ryth bring to the table, and for the most part it translates into a very respectable end product. If I was to point towards one elements of Deceptor Creator that made the weakest impression on me, I could say that some of the central riffs of songs leave a smidge to be desired. “Auto-Autonomous” rides a good line of delivering mid-tempo poise and groove while still having some fire and weight to itself, but “Self Destruct” reminds me too much of something like Slipknot’s “Psychosocial” in its verse to have me truly on board. Likewise, “Facade”, which ultimately reveals itself to have some of the album’s best moments, is a tad pedestrian with its initial pagan metal-style groove.

Beyond that, though, there are many areas in which Deceptor Creator shines. “Auto-Autonomous” shows early on how willing Ryth are to spill over into tech-death and melodeath, and it features a couple of the first showstopping solos on the record, of which many more follow. “White Portrait” and “Spiral Flood” further exemplify the merits of their stylistic fluidity, while more exhilarating lead guitar work can be encountered on the likes of “Self Destruct” and “The Rise Of Erebus”. The album also does very well when it draws back the extremity entirely and moves into the kind of soft-yet-ominous space-y musical meandering that some of the earlier 90s tech/prog-death bands did so well; “White Portrait” features a very effective ‘calm before the storm’ bridge that sets the scene perfectly for a rousing outro, while “The Rise Of Erebus” nicely channels some of Obscura’s Omnivium in its musical contrasts.

The standout moments for me, however, have to come down to the clean vocals. They don’t make a real appearance until the climax of “White Portrait”, so when you first hear Mohammad Al-Meshkhas evocatively belt out over a backdrop of blastbeats in the finale of this track, it causes an initial shock to the system, but both the tone of the vocals and the melodies he uses work excellently both here and later on. I briefly touched upon “Facade” earlier, but while the black/pagan vibe early on can feel a tad plodding, it’s completely reinvigorated in the closing minutes purely due to Al-Meshkhas’ powerful, touching refrain. Rounding off the record, “Explicit Name”, more than anyone else that immediately comes to mind, reminds me somewhat of the melancholic masters Ghost Brigade, as a harsher but restrained doom track bleeds emotion in a delicate, sorrowful melodic conclusion. It’s an unexpected but beautiful way to resolve a predominantly intense album.

Although I’m sure circumstances beyond their control may dictate otherwise, I hope we get to hear more from Ryth far sooner than in another 14 years’ time. Even though I did find a few underwhelming moments across the album, some of those even managed to redeem themselves as the songs they featured in evolved, and the strongest parts of the record are excellent. I’d particularly love to hear more from them in the vein of “Facade” and “Explicit Name”; however, if you prefer your explorative metal to be on the less melodic and more maddening side, perhaps there’s something else from the end of 2022 that might appeal to you...