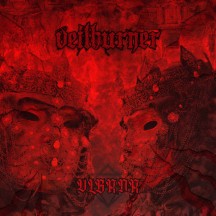 
Pennsylvania’s Veilburner have been rather busy since their formation, releasing 6 records in 8 years. The newest of these sees the duo feeling the pinch of the cost-of-living crisis, as they can’t afford any vowels; thankfully, they had enough resources available to make the music on VLBRNR complete and exhilarating.

I’m reviewing VLBRNR as the third of four reviews covering prog-metal at the more extreme end of the spectrum, but it’s perhaps a tad disingenuous describing this as falling particularly under the prog umbrella. Veilburner play a dissonant, occasionally black-tinged form of death metal, but it’s not the most orthodox; while it’s rarely described as progressive death metal, adjectives such as experimental, avant-garde, off-kilter and even pseudo-progressive have been used in relation to their music. VLBRNR is a continuation of this exploration of the weirder fringes of the extreme metal spectrum, and one that is captivating in a variety of ways.

There are moments of more straightforward death metal brutality on this record; “Lo! Heirs To The Serpent”, in particular, kicks off with a fairly primitive display of aggression, while “None So Hideous” smashes listeners with some jagged infernal blasting onslaughts. However, Veilburner generally shy away from simpler rhythms and chord progressions here, whether it be the mathy rhythmic freneticism in parts of “Envexomous Hex”, the off-kilter time signatures in the more prog-leaning quasi-instrumental “Burning The Veil”, or some of the more maddening and impenetrable grooves in lengthy closer “Ruin”. The uncomplicated and incomprehensible alike are served ably by a vulgar and suffocating production job that offers the more cavernous portions that necessary depth while leaving something in the tank for the more sophisticated moments.

Veilburner are known for their use of unusual sound effects and tones, and that is a semi-regular feature here, from the eerie synths in “VI (Vulgar Incantations)” to the blistering wind-like sounds in “Burning The Veil”. Perhaps one of the more intriguing sonic explorations is in “Interim Oblivion”; kicking off with space-like ambient electronic sounds, it initially moves into quintessential Ulcerate-style disso-death, but later on, the peculiar production of the music and vocals in particular almost gives the sense of being underwater. The vocals cover a span of tones; there are growls, shrieks, yells and everything in between, with some sickeningly deep growls in “Unorthodoxagon” making a particularly strong impression.

VLBRNR is, for large segments, a vulgar, chaotic affair, but there are some more melodic or atmospheric tones to be encountered here. “Interim Oblivion” hints at more extensive departures later on, following up that spacey intro with the use of some subtly bright melodic tones later on. There is also proggier songwriting and use of cleaner, more melodic tones on “Burning The Veil” and “Unorthodoxagon”, not to mention the synthy interlude “Exhibitionism In Limbo”. The culmination of all of this is the fascinating standout cut “Repulsed By The Light”, a song that shifts far away from pretty much everything else Veilburner are doing here. A more accessible and spacious blackened death metal track is repeatedly lit up with some shockingly evocative lead guitar melodies and generally cleaner guitar work, which is allowed to develop impressively later in the track. It’s intriguing to imagine what this song represents for the future of Veilburner considering just how much it stands out here, but, whether intentional on the band’s part or not, it’s hard to look past “Repulsed By The Light” for the highlight of VLBRNR.

A very solid follow-up to last year’s already-impressive Lurkers In The Capsule Of Skull, VLBRNR represents Veilburner’s frenzied, hellish musical vision, albeit one that nevertheless finds space to dabble with unexpected dalliances in less extreme musical directions. Even as disso-death begins to repeat itself to some degree, Veilburner offer an approach that does not feel remotely like treading old ground. If you enjoy hearing similarly explorative approaches in a more blackened area of metal, there’s one more record I have to bring to your attention...