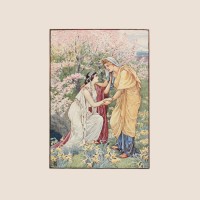 
Saturnine December is an album that spent the longest time stuck in development hell, and then very nearly was consumed by flames before it could escape; thought to be lost in a fire last spring, the hard drives that the unfinished versions of these songs were stored on somehow survived. Rescued and subsequently completed, this is a labour of love, and exhibits all the inspiration and imperfections to be expected from such an endeavour.

Antecantamentum is a one-person black metal project masterminded by an individual going by the performing name of Melpomenë (formerly Xokoyotzin), and it’s a project that’s been around for a reasonable amount of time, with several EPs and full-length albums already released. However, the work that has gone into Saturnine December has preceded many of those releases; the Bandcamp page for this album states that writing for the music has principally occurred over the past 6 years, albeit with some parts dating back to even a decade before that. As already mentioned, a fire at the house of Melpomenë, which took many of the instruments used to record what had already been committed to tape for the record, did not manage to take the tracks themselves, and those songs were brought to completion even as Melpomenë was stuck moving around in the aftermath of losing her home. The culmination of all this work is an album crammed full of ideas that span a range of black metal sounds, both harsh and euphoric, all of which are somehow converted into enthralling compositions.

I’ve included this review in my sequence of extreme prog album reviews; one could debate the extent to which this is a prog-black album, but between the multiple lengthy songs, the convoluted progression of each of these and the use of melodies inspired by the likes of Opeth, there is definitely a clear influence from that world of metal to be heard here. The black metal here is more on the melodic side, whether outright blissful blackgaze or slightly sharper-edged meloblack, but there is also some more venomous blackened material to be found here, and the combination of the harsh shrieks and croaks, punishing tremolo, blast-heavy percussion and lo-fi production means that this is not just ‘shiny post-hardcore with shrieks on’ like some blackgaze can be. There’s also non-black metal and other sounds to be heard, whether it’s the quasi-Gothenburg riffs in “In The Green Petrichor”, the dissonant panic sounds in “Valley Of Deathly Reveries”, or the anxious tech-death snippet midway through the closing title track.

Before I delve into the many strengths of Saturnine December, I think this is a good point to just recognize that there are some rough edges compositionally. That ‘tech-death snippet’ in “Saturnine December” that I just referred to is one example of a passage that appears out of nowhere, doesn’t make much sense, and then disappears in place of something that doesn’t really feel connected to it, and while it’s the most egregious example, it’s not the only one. On top of that, there are transitions between independently strong sections that don’t gel particularly smoothly, with an abrupt jump away from a lushly melancholic atmo-black passage into an all-too-brief piano ditty late in “Luna Cadens” standing out in particular to me. It’s understandable that not everything here was placed together entirely optimally given the conditions of its creation, but these slight niggles on the songwriting front are the main weakness of Saturnine December.

However, assuming one is able to overlook these pitfalls, there is an impressive array of high-calibre material to savour across the album. The first two tracks are perhaps the least noteworthy, offering a glimpse at the variety of approaches to be heard across the record as a whole without necessarily featuring the strongest examples of any of them, but the subsequent quartet are each a delight in their own way. “Valley Of Deathly Reveries” spends plenty of time initially in quiet contemplation, before unleashing an onslaught of intensity that nearly drains all light; it is only right in the closing couple of minutes that some levity is heard with a blissful melodic passage that reminds me a tad of some guitarwork on recent records by The Contortionist. “Wraith”, the shortest of the final four songs, is generally on the lighter side, with a couple of clean guitar motifs that could well be ones written and unused by Neige for Alcest, but even then there is a blasting undercurrent throughout.

The biggest highlight of the record, for me, is “Luna Cadens”, one that that gives me early/mid-Opeth vibes when a gloomy guitar melody sings out above a double bass roll and atmo-black background, and which subsequently features frenetic yet serene atmospheres, delicat acoustic guitar passages, dreamy blackgaze, and a poignant, sorrowful climactic motif. The final title track, which is opened by cello from returning collaborator Kakophonix, contains some more sinister, ominous, slower riffs, but it also takes the record to arguably its harshest point with an emphatically distorted noisy peak late on.

Saturnine December, out of all the albums I’ve received in this final batch of 2022, is one where the unrefined edges and weaknesses are most glaring, but at the same time, the earnestness of what is clearly a long-term passion project and the amount of creativity that is consequentially on display is easy to admire.