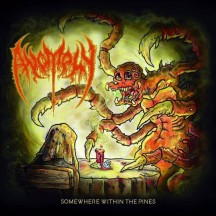 
01. Cursed To Meet Another Sunrise
02. Somewhere Within The Pines
03. These Cold Weeping Winds
04. My Old Bleached Bones
05. Don't Go Out Into Those Woods Alone
06. Sentenced To The Trees
07. One Last Glimpse At The Cursed Sun


There are usually one or two categories in our Metal Storm Awards each year where the competition to just even get nominated is intense. For me, I think of post-metal and melodeath in 2021, prog in 2020, and black metal in 2019. Frankly, this also applies to extreme progressive metal pretty much every year, but this one in particular, I feel like I’ve already reviewed more nomination-worthy albums than there are spaces to fill. Nevertheless, my (almost certainly) final reviews of the year will be dedicated to highlighting a few late gems worthy of consideration. One of them is from a band called Anomaly, but, as already shown, releasing a quality prog-death metal album this year is not an anomaly.

Anomaly hail from Milwaukee, Wisconsin, and have been around for over a decade (assuming that their 2013 show mentioned in this article wasn’t their first ever) since vocalist/guitarist Neil Tidquist started jamming with keyboardist Mary Beers. It was a long journey for the group up to the release of their debut record Planet Storm last year, but it’s been swiftly followed up by Somewhere Within The Pines. One look at that band logo and you might expect Autopsy-style violence from the group, and a quick visit to their earlier material suggests that once upon a time, this may have been a case; however, the present incarnation has evolved into something far more sophisticated.

With those long song titles, you might be expecting a concept album, and what would you know, it’s a ghastly tale of sinister backwoods violence. Such a story does merit some venom, but to begin with, it’s more measured; the quasi-Gojira steady groove kicking off “Cursed To Meet Another Sunrise” persists for several minutes before the first blast in anger is heard, most of the extremity coming from the rasped vocal approach. Across this slow burn of a track, Anomaly’s guitarists get an early chance to show off their technical talents with some flamboyant solos, but the group never push beyond a general ominous aura into all-out aggression.

Perhaps a tad overlong for what it’s aiming for, “Cursed To Meet Another Sunrise” nevertheless adeptly sets the scene for this story, but it is the 9-minute title track that immediately follows it that takes the record to the next level. The riffing early in this song is proggier than on its predecessor, in ways going towards both technical metal and melodeath, and the clean-sung contrasting voice has a hint of early Disillusion to it. Halfway through, those prog wings spread further for a sumptuous clean guitar bridge (jazzy bassline also a nice touch), and when that melancholic tone is carried over into the metallic riffing, I’m fully on board with what Anomaly are doing on this album, not to mention the darkly atmospheric outro that rounds off what is clearly the standout song on Somewhere Within The Pines.

After the title track, there are 5 more songs, four of which last for between 6 and 9 minutes; the one exception is “Don’t Go Out Into The Woods Alone”, a little acoustic devil blues song that won’t be for everyone. The four remaining songs generally maintain the quality level set by the first two songs; the riffing spans techy, groove, extreme and even, in moments, more classic metal-oriented approaches (as can be glimpsed in “These Cold Weeping Winds”). More Disillusion-esque segments can be encountered on “Sentenced To The Trees”, a song that spends two-thirds of its runtime in dark waters before shifting into a The Jester Race-style delicate acoustic-driven finale. All the remaining songs find some way to take things into a more melodic and cleaner direction late on, with the exception of “These Cold Weeping Winds”, and in each case the direction they go into is very enjoyable.

Anomaly have evolved nicely into a very respectable modern extreme prog outfit; if there’s one way in which they don’t quite match some of the albums I mentioned in the introduction to the review, it’s that they don’t always manage to keep me engaged throughout the songs. The songs, as already mentioned, are consistently on the longer side, and scattered throughout all of them are very solid moments, but I think as complete packages they don’t quite sustain that level as well as the best bands in the genre do, as I find myself getting impatient waiting for either the highlight moments or the song end with a couple of tracks here. It’s a minor issue; on the whole, I like Somewhere Within The Pines rather a lot, and particularly in its best moments on the title track and “Sentenced To The Trees”.

If you’re not yet overwhelmed by the onslaught of excellent heavy prog this year, then spare some time to venture Somewhere Within The Pines, particularly if you have a taste for a band like Disillusion. And for those like me that are still hungry for more after getting through this one, may I point you in a more death direction…