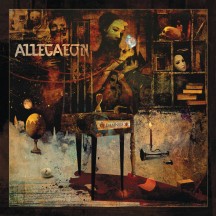 
Damnum, according to the promo materials, is the first Allegaeon album on which all band members creatively collaborated. Evidently, some of the previously unheard voices are big fans of Swedish metal.

Allegaeon have been steadily busy since their formation, having already reached album number 6. Across those records, they’ve also shown steady signs of development; what started as a groovy, densely heavy and technically-minded strain of melodeath has become gradually more progressive, with 2016’s Proponent For Sentience something of a high water mark on this route (the presence of a Rush cover particularly emphasized the group’s more progressive leanings). 2019’s Apoptosis was a bit of a step back on that front, with the album more single-minded musically and groove-oriented in the vein of their earlier albums; I found Apoptosis to be a fairly strong album, but it wasn’t quite the direction I was hoping Allegaeon would go in. Now, here comes Damnum to really shake things up.

Surface descriptions of Damnum as a prog-inclined technical melodeath album makes it sound very much akin to its predecessors. However, the forms those styles feel unexpected. A lot of it comes from the clean vocals on the album; for example, would “Of Beasts And Worms” give me such strong Soilwork vibes if it weren’t for the clean-sung hook in the chorus? Some of it instead comes from the instrumental side; “Bastards Of The Earth” is a curious combination of meloblack tremolo, Gothenburg grooves and flairs of Obscura-style tech-death.

Sometimes, it’s both the vocals and the instrumentals. “Called Home” feels every bit a 2000s Opeth song in parts: skip to 2 minutes in and tell me that those baritone cleans aren’t indebted to Mikael Åkerfeldt, nor some of those sinister guitar passages and soft breaks. A few of the namedrops I’ve featured in this review thus far probably give a clear idea of how far Allegaeon spread their wings musically on Damnum; to add to the above, there’s further meloblack on “Saturnine”, Persefone-tier melancholia on “The Dopamine Void, Pt. I”, and the group’s latest tribute to Devin Townsend with the high-pitched Strapping Young Lad vocals in the pre-chorus of closing track “Only Loss”.

With a lack of diversity being one of my bugbears with Apoptosis, am I won over by the musical range on Damnum? Short answer, yes: I find this to be a thoroughly enjoyable and rewarding listen. I get a lot out of the metalcore-influenced melodicism of the climax to “Into Embers”, the Latin guitar break and bass solo in “To Carry My Grief Through Torpor And Silence”, and piano solo in “Blight”, amongst a litany of memorable moments. At the same time, this is still very much an Allegaeon record, full of Riley McShane’s deep growls, the highly technical instrumentation they’ve amply exhibited in the past, and plenty of chunky, groovy extreme riffs. It’s definitely a softer and more melodic record than the bulk of their discography, but as far as I’m concerned that’s by no means a bad thing; Damnum basically retains the essence of what made Allegaeon, but also draws in various new influences and successfully expands the band’s sonic palette (more successfully than Rivers Of Nihil’s The Work, in my opinion).

I feel like Damnum is the ideal kind of record for a band like Allegaeon to put out; it’s not a rehash of their existing albums, and there’s enough new going on here for it to be potentially a bit risky, but at the same time it’s not a grand departure that has the potential to divide their fanbase, at least from what I can see. What’s more, it’s a shift that works really well, with the band’s strong sense of melody and awareness of how to bring in the Opeth/Soilwork influences and reframe them within the context of their own work paying off nicely. Certainly, considering Allegaeon are a band I rarely return to once I’ve given each new record a couple of spins, I can envisage myself giving Damnum a fair amount of additional airtime after finishing this review.

Written on 24.02.2022 by
musclassia
Hey chief let's talk why not
More reviews by musclassia ››