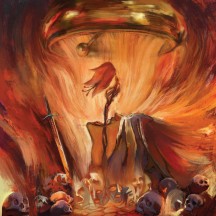 
Passion Of Depression, a concept album that portrays the pain, pleasure, joy and sorrow one experiences across the journey of life, deftly incorporates each of those emotions into an emphatic extreme prog journey.

This record is the second full-length album from Singapore-turned-US band Lamentations, who, at this point in time, are remarkably similar in terms of personnel to Monotheist; since the project’s debut full-length dropped several years ago, th previous guitarist Clarence Jeremiah has departed, and founder Danny ‘Jungle’ Jacob has filled all the instrumental roles with members of Monotheist (a group whose debut record Scourge featured Jacob as a guest musician). Having rather enjoyed Scourge, it’s not really surprising that Passion Of Depression has made a positive impression on me; however, even amidst a sea of quality extreme prog metal releases this autumn, there’s more than enough to this sophomore effort to demand attention.

Passion Of Depression features several guest musicians, including not one, not two, but three guitarists with past involvement with Cynic; one might assume that this reflects an inspirational debt to the Floridian band that would bleed through into the music on this album, and certainly elements of that group’s music can be heard at points here. However, having read a few other reviews of Passion Of Depression, the one group that I’m baffled to have not seen mentioned in any of them is Persefone, because there are plenty of moments across the record that heavily resemble the Andorrans’ past work. It comes through in the softer piano-driven segments with emotional clean-sung vocals (midway into “Prodigal”), in the guitar solos (later in this same song), but most of all, just listen to the climax of “Sombre”: the synths, the gnarly groove, the suspense, it sounds so quintessentially Spiritual Migration.

As an unabashed fan of Persefone, hearing another band channel the same energy is by no means a negative, particularly when it’s done as effectively as it is here, but there’s certainly more to Lamentations than resemblance to this one band. The clean vocals do have the same vibe as Miguel Espinosa in several sections, but another logical comparison in different sung passages is Vola; the brighter melodic moments of “Anew”, “Ire” and “Shiver” have a hint of that outfit. As far as the more extreme aspect of Passion Of Depression is concerned, they can range from tech-death brutality through to more melodeath-inclined environs. The latter comes to the fore on “Anew”, which I could imagine appealing to Be’lakor fans, while that tech-death extremity is most heavily emphasized on “Ire”.

This variety does lend the record to appealing to fans that range across the extreme prog-metal spectrum, but I do feel that there are areas in which Lamentations are stronger; I can take or leave “Ire”, but the more melodic aspects of this record shine through nicely, such as the solos (guitar and keyboard) in “Obeisance”. It’s also an album that makes a strong impact in its more suspenseful moments; on top of the aforementioned climax of “Sombre”, the record’s other 10-minute-plus track and closing song, “Nurture”, has a nicely paced lengthy run to the finish line, building from delicate piano and singing through to an ominous, powerful conclusion.

Perhaps there are a few too many moments of this record that strongly remind me of Persefone (although it seems that I might be the only one with this opinion), but the way these moments are delivered and the number of other ideas that are incorporated into the final product makes Passion Of Depression a really compelling release and a strong first outing for the Monotheist-ized current line-up of Lamentations.

Written on 29.11.2022 by
musclassia
Hey chief let's talk why not
More reviews by musclassia ››