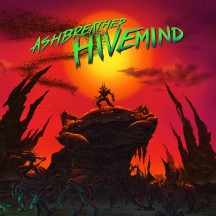 
A 37-minute song-album about cosmos-travelling scientists experimenting on a telepathic insect hivemind species? Yep, you don’t need me to tell you that this is a prog album.

Ashbreather started life as Montreal’s resident Opeth tribute band, before they ventured out into writing original music. Originally a quartet, the band’s initial vocalist left the band following the release of their self-titled debut album, the remaining trio carrying on with each member contributing vocals. After the gloriously titled 2021 EP ”Ow, My Eye”, this new-look Ashbreather clearly entered 2022 with a grand vision, as the album-long song format is unchartered territory for the group. Ambition is all well and good, but epic ventures such as this do have the risk of falling flat; rest assured that this is not the case with Hivemind.

With a background in Opeth covers, plus the kind of lyrical matter and album colours on display here, one might be expecting a progressive death metal album, perhaps similar to Cryptic Shift’s Visitations From Enceladus and its similarly humongous opening track. Well, there’s certainly plenty of prog here, and in periods it does dive into death metal (particularly in the more cacophonic latter stretches of the album), but surprisingly enough, the heavier portions of this record arguably derive more from sludge than any other extreme metal genre. This is clearer earlier on in the record; if one is listening to the version of Hivemind that is broken down into 11 sub-parts, they will likely instantly recognize the influence of classic-era Mastodon in “Hivemind II”.

Now, those subdivisions do help when trying to refer to highlights of the record, whether it be the incredible combination of frenetic lead guitar and blistering drum groove in part IV, the prog-on-steroids mania throughout part V, or the subtly intensifying chaos in the sci-fi eeriness that is part VII. However, with one or two exceptions, these individual parts do not function as standalone songs; Hivemind is a record that needs to be listened to as a single complete experience. To that end, it’s impressive how well paced it is, with the end result that, while it obviously feels long, it doesn’t feel draining.

An important reason as to why it doesn’t feel draining is because Ashbreather consistently include standout moments with regularity across the record’s runtime; while there is an intentional slowdown of the record midway through in parts VI and VII, there aren’t any segments that unintentionally drag. A lot of credit has to be given to each of the trio for their respective contributions; the riffs are crunching, the guitar leads are exhilarating, the drums are a tour de force, and the bass cuts through nicely in some key moments. The collective efforts on the vocal front are arguably a bit of a mixed package, but even the rougher clean singing parts manage to reach a point of ‘doing what they need to'. On the vocal front, one major cameo is Matt Moss of Slugdge on part X, with this feature coming just as the album is reaching its peak in terms of intensity and extremity.

Still, while I said that the album is consistently solid throughout, I think it’s fair to say that the moments that I’m less awed by are largely present within the first 15-20 minutes, even if they are few and far between. On the flip side, “Hivemind” really goes to another level with about 10 minutes to go; an already thrilling ride absolutely goes for the jugular, with emphatic drumming, killer riffs, and a suffocatingly relentless build in tension. The niggles of the earlier sections are largely forgotten by the time one reaches the end of Hivemind.

Ashbreather’s career is too young to know whether this one-song album is a bold one-off experiment from a fledgling writing team or the first of several to come, but given the level to which they’ve nailed it at the first time of asking, I would absolutely not complain if we get more of the same going forward.

Written on 23.11.2022 by
musclassia
Hey chief let's talk why not
More reviews by musclassia ››