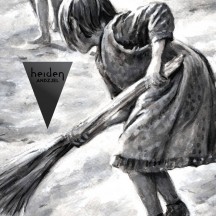 I only heard of Czech group Heiden for the first time within the past fortnight when their new album Andzjel appeared in the upcoming releases queue, but just from having heard the album and seen its genre tagged as ‘post-rock’ in our database, I could tell that there was an interesting backstory lying in wait, because this is by no means a post-rock album. It turns out that Heiden have been around for quite a while, as Andzjel is their ninth full-length record. In that time, they’ve started off as a fairly conventional black metal group (Potomkùm Pozemského Soumraku), but in the subsequent 2 decades, they gradually toned down the intensity of said black metal, before going on a trajectory towards post-rock and other alternative rock styles that saw them effectively abandon metal altogether on 2015’s Na Svůj Příběh Jsme Sami. The journey that Heiden took across their first 8 albums was unconventional, but by no means unprecedented; however, Andzjel represents a sudden and remarkable change in direction.

From what I could tell from skimming through their past discography, the last Heiden record on which extreme vocals appeared was 2013’s A Kdybys Už Nebyla, Vymyslím Si Tě, and even then they were in a minority. Well, not 30 seconds into Andzjel and black metal croaks are back on the menu, and given the music that they’re accompanying, their presence is not shocking. “Nevěřím Těm Očím”, however, does not represent a return to the conventional black metal sounds of Heiden’s early material. The emphatic drums, peculiar rhythms and brash keyboard motifs that kick off this track remind me, more than anyone else, of Oranssi Pazuzu, and their Mestarin Kynsi record in particular. Despite this, Andzjel is not an album that falls squarely under the umbrella occupied by the avantgarde Finns and their ilk; if nothing else, the 33-minute Andzjel is far too concise to sit alongside the colossal song runtimes that most of said ilk depend upon. Beyond that, though, there is more than manic chaos to be heard on “Nevěřím Těm Očím”, and the record as a whole.

Past this opening attack, “Nevěřím Těm Očím” first descends into a sustained lull, a darkly subdued jazzy passage that harkens to ‘urban’ black metal bands and avantgarde bands such as Katharos XIII or Netra, before emerging defiantly with a semi-triumphant blackgaze euphoric burst, one that is somehow segued incredibly seamlessly back into the same chaotic sequence that opened the track. Moving onto the next track, “V Hodině Vlka”, Heiden revert back to the post-rock stylings of their more recent efforts, but while still sustaining those blackened vocals. In some ways, Andzjel is a quasi-combination of Heiden’s earlier and later phases, but with aspects of both periods either chucked into a proggy/avantgarde blender or otherwise discarded.

The end result is a record that is unpredictable, captivating, and over far too soon. Whether it’s the mellotron tones and prog rock stylings of “Musím Ti Tolik Říct”, “Září”’s crunching, complex grooves, or the soft-loud tonal contrasts that feature in closing track “Patřím Sem”, Andzjel offers plenty of variety, without feeling disjointed. Throw in a reprise of those Oranssi Pazuzu-esque chaotic mannerisms on “Běsů Se Nezbavíš”, and one is left with a fascinating and brief avantgarde/prog black metal record that sounds a long way away from the alt rock sensibilities found on Heiden’s prior album Země Beze Mě.

Whatever brought about this about-face in Heiden’s musical trajectory, it is apparent from Andzjel that the Czechs had unfinished business within the realm of black metal, and perhaps their rock experiments in the past few years played a significant role in shaping this new album’s imaginative reassessment of what they can accomplish within the boundaries of black metal. Whether this is the start of a new path or just a one-off detour remains to be seen, but while whatever Andzjel’s legacy within the Heiden discography ultimately ends up being is yet to be determined, there’s plenty of scope to argue that this is the group’s most noteworthy record thus far.

Written on 20.11.2022 by
musclassia
Hey chief let's talk why not
More reviews by musclassia ››