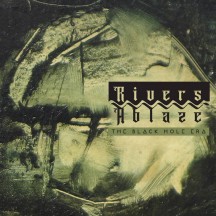 
There was a lot of great progressive/technical death metal in 2021; with more albums like The Black Hole Era, 2022 will end up being similarly fruitful for genre fans.

I feel like I only scratched the surface in that opening line, when considering all the quality albums that didn’t even manage to score a nomination in the extreme progressive category for 2021, but it was a very stacked year. While there’s been some great proggy death (Hath) and extreme prog (Persefone, Allegaeon) so far in 2022, there’s hasn’t been much in the vein of the albums I tagged in the introduction that’s impressed me so far. Well, at least there hadn’t been until Rivers Ablaze landed last month with their third album, The Black Hole Era.

Like many a prog/tech-death band, Hungarian project Rivers Ablaze (who, having only formed in 2019, seem impressively prolific) look to the cosmos for inspiration. I don’t know what it is about space that invites metal that is melodic, technical, intense and, at times, quirky, as The Black Hole Era scratches something of a similar itch to other space-influenced bands such as Obscura and Vektor without particularly sounding like either. In terms of being an extreme metal band, the intensity of Rivers Ablaze’s instrumentation in their heavier moments ranges from almost mainstream-accessible grooves (with a couple of particularly bouncy ones midway into “Cosmic Venture Arch” and “The Claiming”) through to frenetic blast-heavy tech-death (“Vortex”) or occasionally more atmospheric and blackened variants, such as the tremolo intro to “Perished Foundations Of Life”.

Rivers Ablaze as an extreme metal band are generally quite impressive; they’re very technically efficient, and some of the build-up leading into the more full-pelt blasts of extremity culminate in a very satisfying pay-off, such as a transition from a guitar solo into hyperspeed blasting near the end of “The Claiming”. However, it’s the more melodic side of the band, and the ways in which the band fluctuate between and merge the two of them, that makes The Black Hole Era more attention-grabbing. All of the full-length tracks (there’s two briefer interludes, one ambient, and one with loud sci-fi keyboard sounds) find some way to work in a melodic guitar solo, some keyboards, clean vocals or a combination of these, and the fluid, progressive natures of the songs make these moments arrive naturally and sound great.

“Vortex” starts off relentlessly, but begins to flip back and forth between gnarly riffs and melodic guitar leads (with one particularly celestial one really making an impact) before pulling back altogether to focus on a finale with clean singing, lush guitar melodies and euphoric blackgaze tremolos. Similar in its trajectory is “Perished Foundations Of Life”, which flies out the blocks sounding like a symphonic black metal experiment but fits in some lovely melodic guitar solos; however, instead of finishing at its sofest, it works its way there until around the midway point, only to take the ideas that had been brought in and merge them with their tech-death side during the second half. Taking an inverse approach, “The Claiming” begins clean and gentle, only to let loose after a prolonged introduction.

Most of The Black Hole Era serves as a very solid rendition of the space-prog-death vision that many bands have shared; however, there are times when it doesn’t quite hit the mark. Perhaps the most glaring to me is “Descending”, whose cookie-cutter main verse stomp and irritating chorus make it comfortably the least enjoyable song here, although those with a particular taste for clean vocals with an ‘eerie, lost in space’ vibe might find it more rewarding. I also find “Giants Of The Sky” to be a somewhat irksome interlude considering how stirring some of the strongest moments of “The Claiming” are. However, “Unholy Expanse”, the proggiest song of the bunch, does incorporate the ’space oddity’ feeling more successfully when it goes on a detour midway through, and this track has plenty enough good moments to end the album on a positive note.

I wouldn’t put this album quite in the tier of an Obscura as far as prog-death in this vein is concerned, but Rivers Ablaze have got a good handle on how to balance the extreme and the serene, and write both solid riffs and searing melodic guitar solos very effectively.

Written on 11.05.2022 by
musclassia
Hey chief let's talk why not
More reviews by musclassia ››