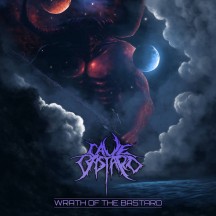 Just the day after I’d finished writing my review of the latest Obscura record, in which I also touched upon the virtues of recent releases from Archspire and First Fragment, I find myself taken in by Cave Bastard’s Wrath Of The Bastard. Now, tell me you read that band and album name and didn’t immediately think that this was going to be a sludge record; I certainly did. My initial disappointment at clicking on the stream for this album and discovering there was no sludge to be found was swiftly replaced by excitement at a progressive technical death venture that balances extremity with sufficient moments of melody or clarity, and which follows established conventions whilst retaining a personality of its own.

In terms of the flavours listeners are treated to on Wrath Of The Bastard, there’s a strong death metal core, but one that splinters out into progressive, technical and even occasionally more classic directions. “Anti-Vaxxtermination” starts off with a modicum of restraint, the aggression of the instrumentation countered by a levity in the guitar tones, but as the song gathers momentum, the guitars and vocals go down into lower registers to boost the potency of the attack, whilst chaotic guitar leads and jagged tech riffs are thrown into the equation. There’s also space for eerie dark progressive bridges and more guttural gruffness to spill into the cooking pot; it’s an ever-evolving blast of technically-minded and progressive but also atmospherically considerate extreme metal, willing to slow things down for grandstand moments or even lean towards Vektor-esque thrash to broaden the sonic palette.

“Chaos Unearthed” shifts effortlessly from hyperspeed melodic tech riffing to pummeling, dirty death grooves; the band can slow down when necessary to add a weight to the tracks in key moments, delivering with conviction across the wide tempo range found on the album. Still, plenty of the album does fly at a blistering pace, and it’s exciting when the band do just attack the listeners with blasting drums and rapid tremolo guitars as on “Fools Of Enslavement”. Cave Bastard show a good inclination of when to exploit different tempos to keep the tracks feeling fluid; rarely does a blast assault, mid-tempo groove or slower trudge feel excessive.

The song that has really stood out to me on first listens is “The Kreist”; a surprisingly melodic opening acts as one extreme in a song that also pushes into semi-dissonant territory as it progresses, adding grimness to a track that is otherwise rather soaring with its tremolo melodies and melancholic in a sad dirge towards its conclusion. The range of emotions and tones in "The Kreist" elevate it above an already strong tracklist. The closer “Futility En Masse", in contrast, is a meaner low-end attack, but still makes a powerful impact.

Overall, Wrath Of The Bastard is an impressive and satisfying record, and one with a good mix too, one that allows the bass to cut through and generally balances the various elements effectively while finding a good mixture of clarity and force. If there are areas for Cave Bastard to work on with future releases, perhaps the rapid assaults that so regularly occur as the album progresses could be revamped to have a bit more structure beyond ‘tremolo this note for a bit, then shift to this one’ (see the opening of "Fools Of Enchantment" for an example); “Anti-Vaxxtermination” is a highlight on the record partly due to veering away from this approach even in its tremolo assaults.

Still, that’s a minor quibble. Wrath Of The Bastard is an album that allows for joyful headbanging to bruising grooves, flailing to frantic tech-y attacks and reveling in grim, slow trudges, and offers all in relative abundance courtesy of well-flowing and intelligently constructed songs. This isn’t going to compete with the wizardry of First Fragment or brutality of Archspire, but if your tech/prog-death appetite still needs a bit more satiating, I would encourage giving Cave Bastard a moment of your time.

Written on 17.11.2021 by
musclassia
Hey chief let's talk why not
More reviews by musclassia ››