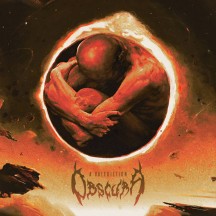 
I feel like I’m mentioning every other week how much good melodeath there is this year; well, there’s another sub-genre with ‘death’ in the name that’s doing pretty well too.

The end of October saw the release of two significant tech-death records in the form of Bleed The Future by Archspire and First Fragment’s Gloire Éternelle, with Archspire continuing to push the limitations of hyperspeed technical brutality with the former and First Fragment stunning all with their virtuosity and ambition on the latter. Not a month later and Obscura, now something of a veteran act within tech-death after nearly 20 years, are here to unleash their sixth record upon the world.

A Valediction is a significant record for Obscura themselves, with it featuring the first appearances on an Obscura record for Christian Münzner and Jeroen Paul Thesseling since Omnivium in 2011 (this isn’t a complete Omnivium re-union; instead of Hannes Grossmann, A Valediction features David Diepold behind the kit for his debut album with the band). With these virtuoso musicians back into the fold, it won’t be a surprise to most people that A Valediction is another worthy addition to both the band’s discography and the technical metal scene as a whole.

I’ve always considered Obscura to be one of the more compelling bands associated with tech-death, but not necessarily for their technicality, which is predictably impressive on A Valediction. I’ve found Obscura to be particularly notable because, since 2011’s Omnivium (if not earlier), they’ve fallen somewhere between progressive death metal and technical death metal, applying instrumental and theoretical complexity whilst taking cues from less technically/extreme-minded prog and other metal styles. Compared with the ballistic intensity of an Archspire or the relentless complexity of a First Fragment, Obscura have always been a bit more on the accessible side, and that carries across to A Valediction, which arguably goes further than any of its predecessors in venturing away from tech-death, whilst still remaining recognizably connected to that scene.

One can’t listen to the drum onslaught, chaotic guitar leads and fret(less) board antics of Jeroen Paul Thesseling early on “In Adversity” without recognizing this as an Obscura song; however, as the track progresses, the song develops into something awfully close to a Gothenburg track with some of its riffs, grooves and hooky guitar leads. Never abandoning tech-death, the nevertheless song features multiple sections that would sound perfectly in place on a melodeath album, not to mention the unexpectedly djenty brief turn later in the track. It’s also hard not to hear the influence of some established Gothenburg-style bands at times on “When Stars Collide”, with the cleanly sung chorus actually featuring Björn “Speed” Strid of Soilwork.

At the same time, this is an Obscura album; opening song “Forsaken” recaptures that ‘prog-meet-tech-death’ charm of “Septuagint” from Omnivium (the two tracks are even almost identical in length), with the bouts of complex aggression countered with hookier, more approachable riffs and detours into softer territory. There’s also some of that Cynic-inspired weirdness that’s permeated previous records to be heard on this song and “Heritage”, amongst others, right down to the vocoder vocals. At the other end of the spectrum, the likes of “Solaris” and “In Unity” deliver frenetic, contorted complexity that should amply satisfy genre enthusiasts, whilst the rapid guitar soloing on the title track remains incredibly impressive, even having now spent over a decade listening to metal musicians attempt to write the fastest and wildest solos possible.

Before getting the promo copy for this album, I’d seen the record mentioned as potentially being the band’s most melodic yet; I’d have to give Diluvium or Akróasis a more thorough revisit to say for sure, but I’m inclined to agree. However, I don’t think longstanding Obscura fans should be concerned about this negating the impact of their tech-death; the skills are all still on display and there’s plenty of nasty material to delve into on A Valediction. I’m personally a fan of the approach they’ve taken here; by bringing in the occasional elements from outside of prog/tech-death, Obscura have increased the memorability of the songs here without sacrificing what makes them such a key group within the scene.

Written on 17.11.2021 by
musclassia
Hey chief let's talk why not
More reviews by musclassia ››