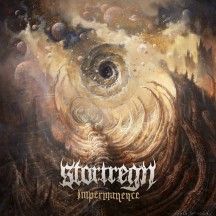 
Technical death metal isn't the easiest style to write memorable songs in; however, adding a bit of meloblack and folk metal to the equation works wonders for Stortregn.

Switzerland's Stortregn have been around for quite a while, but Impermanence is the first record of theirs to pop up on my radar. Despite a brief dalliance with the sub-genre whilst I was first discovering more extreme styles of metal, tech-death hasn't been the most rewarding area of metal for me personally; the jawdropping technicality makes an immediate impact, but it can be challenging to write memorable hooks within all that technicality, and without that, the virtuosity on the surface can only hold the listener's attention for so long. Stortregn make a promising first impression on Impermance with the epic folk guitar melody that opens "Ghosts Of The Past"; you'd expect this stirring introduction to be followed by Viking group vocals, not a blistering percussive assault, but Stortregn do an excellent job of balancing the melodic inclinations of this song with their more extreme and progressive tendencies, ensuring that "Ghosts Of The Past" lands an emphatic first blow on listeners.

"Ghosts Of The Past" is a bit of an odd one out on Impermanence in how heavily it features these melodies that are more commonly associated with folk/Viking metal; the focus of the album shifts closer to Obscura territory after this song. However, whilst the likes of "Moon, Sun, Stars" and "Grand Nexion Abyss" are more frenetic, technical and chaotic in their approach, Stortregn still retain a good degree of melody in their sound, not constantly, but regularly enough to avoid the instrumentation losing its charm. This is partly accomplished through the intelligent lead guitar work, and partly by incorporating some meloblack within the riffing; it's notable that the song that strays furthest into standard tech-death, "Cosmos Eater", is for the most part one of the least interesting tracks here, although the softer proggy break in the last couple of minutes goes a long way to making up for that.

This proggy end to "Cosmos Eater" is one of only a few moments of downtime on Impermanence; even the brief title track is another extreme attack rather than an acoustic interlude. Still, whilst Stortregn may not feel much inclination to completely pull back, there are degrees of intensity within their sound, such as the transition within "Grand Nexion Abyss" to an acoustic guitar-accompanied meloblack-heavy segment; the use of acoustic guitars is another enjoyable element that pops with an pleasantly high frequency during the album, and one that does occasionally get a chance to go it alone, such as later on in "Multilayered Chaos".

I mentioned earlier that "Ghosts Of The Past" was the song that most strongly featured the folkier melodies, and I find that to be a slight shame, as for me it's the best song on the album due to how well Stortregn incorporate them. Perhaps the song that goes closest is final track "Nénie", which surprisingly had me thinking of Wintersun on a few occasions; however, it's still an element of Impermanence that I would be intrigued to see taken further on future records by Stortregn. Nevertheless, Impermanence is the most enjoyable tech-death-based record I've heard in quite a while, and I'll be making sure to keep a closer eye on Stortregn in the future.

Written on 30.03.2021 by
musclassia
Hey chief let's talk why not
More reviews by musclassia ››