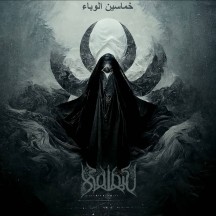 
The Salqiu project released its first music with the full-length debut To Whom It Serves The Triumphant Destiny in 2016; come the end of 2022, and they’ve recently dropped full-length album number 10, with a few EPs scattered in between. While not quite King Gizzard & The Lizard Wizard levels of productivity, it’s still an awfully high rate of output, so one is perhaps unlikely to be surprised to discover that this is a one-man black metal band. Still, this release has something a bit different about it.

The man behind Salqiu, Nuno Lourenço (who has relocated from Portugal to Brazil), is no stranger to experimentation with this project. When looking through the project’s past, one can find Ignóbil, where black metal meets spoken word, and Orfeu, on which one can hear a wide array of non-metal folk and orchestral instruments. 2022 has continued in this vein; Pariah was swiftly followed by its piano-driven ‘evil twin’, The Colossal Weight Of My Illusion..., yet two was not enough. The final (thus far?) offering from Salqiu in 2022 came under the title خماسين الوباء, which is described (as the chosen language for its title might alude to) as Salqiu’s Arabic-themed atmospheric blackened death metal album.

Inspired by travels to Turkey, Egypt and Tunisia, Lourenço incorporates Turkish Alaturka guitars, Arabic flutes, Middle Eastern musical influences and poetry from classical Arabic poets into the music and lyrics on خماسين الوباء (which appears to convert to Khamasyn alwba' in the Latin alphabet, although Google didn’t give me much useful in terms of what this translates to). With a concept like this, one can be prone to wondering prior to pressing play whether it’s going to be a comprehensive fusion of sounds across the album, or whether the region-specific musical cues with be confined to certain non-intrusive moments. Overall, خماسين الوباء is closer to the former; this is very much an extreme metal album above all else, but while the two brief interludes are a major chance for those Arabic musical influences to take centre stage, one can also find flutes, folk guitars, folk singing and other sounds appearing at key moments in the main metal tracks.

Clocking in at 18 minutes, centrepiece “مرثية (An Elegy)” takes up over half the album’s runtime, so the experience does really live and die on the effectiveness of this track. It makes the correct first step by managing to make the transition from acoustic atmospheric introduction to vicious full-pelt black/death metal feel somewhat natural. The extreme metal here is fairly uncompromising, with plenty of blasting, hyperspeed (sometimes dissonant) tremolo and ghostly hoarse vocals, all run through a fairly lo-fi production; in contrast, the acoustic instruments come through clearly, and find a natural synergy several minutes into the song when an ominous looped clean guitar motif rings out above a pounding drum beat, both of which are accentuated by simple yet effective flute. The ebb and flow between furious chaos and atmospheric expansion works very nicely to keep listeners engaged throughout this behemoth of a song, and there is some variation in tone; later on, the clanging drums, windswept shrieks and rapidly strumming guitars embrace a touch of levity, allowing a dreamy lightness to elevate the tone.

“مرثية (An Elegy)” really defines the record, so however much mileage you get out of it will reflect your experience with the whole album. Nevertheless, the two other metal songs, which combined don’t threaten its runtime, are broadly in line stylistically. “الموت (Death)” shifts between lighter and more extreme sounds, allowing the Arabic musical influences to both stand out on the periphery of and also accompany the extreme metal, which fluidly shifts between more black- and death-oriented approaches, and “ترجمة الرغبات (The Translation Of Desires)” is much the same, although it manages to push both the depths of Salqiu’s extremity and also the heights of its melody.

My first real taste of Salqiu’s music, خماسين الوباء has been a fascinating introduction, even if its unique thematic approach means that it’s not entirely representative of the project’s whole oeuvre. Given the frequency of their releases, I’m sure I’ll get an opportunity soon to put that to the test, but if anyone else unfamiliar with Salqiu is intrigued and looking for a way in, I can recommend خماسين الوباء from my own experience.

Written on 21.12.2022 by
musclassia
Hey chief let's talk why not
More reviews by musclassia ››