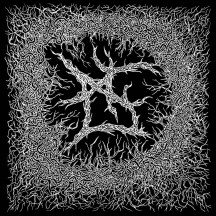 
This is actually the ninth release we have in our database for Lungtoucher once you include EPs, splits and singles, so the title may well be very accurate; however, The Ninth Incantation is the first full-length release from the project, and how nice it is to see another Clandestine Cuts band graduating successfully.

2020 was the first year I started contributing to the Clandestine Cuts series as a writer (March 2020, to be exact, I wonder if you can work out what inspired me to finally dive into it…), and I had a rather successful beginning in terms of picking winners, as bands I wrote up won all of the first 3 editions I was involved with. I am still restless for a full-length release from Autolith and Nada, not to mention other quality bands in the series such as Melancholia, but slowly some of these hidden gems of the underground are bringing out debut albums. Earlier this year it was Backbone, and now it’s the turn of May 2020 winners Lungtoucher to make the transition. This isn’t actually the first time I’ve written about the one-man black metal band since Foolish Necromancy, as their split with Panzerwar, The Battle Of Jórvík, appeared in the Jan-Jun 2021 splits series. Lungtoucher has been busy, and that experience has put them in good stead for their biggest effort yet.

The Ninth Incantation, despite Lungtoucher’s status as a one-man band, is something of a collaborative effort; there are a litany of featured artists on here, including Maiden Hair, who contributed dungeon synth tracks at the beginning and end of The Battle Of Jórvík. The song featuring Maiden Hair here, “Glorious Flames”, does include dungeon synth segments, but that is just part of a longer black metal song; in contrast, “Temperance” is entirely dungeon synth. Outside of these songs, though, this is fairly straight-up lo-fi sinister atmo-black; of the bands I’ve covered in Clandestine Cuts, Lungtoucher is one of the more primitive. However, despite the apparent simplicity of what Lungtoucher offer, there is a certain something to the music that makes this project stand out a bit from their peers.

The record starts on a strong note, as “The Banishing” is perhaps the most interesting song on the album. Between the slow, bleak introduction, the subtle melodies and the understated clean-sung vocals from guest Mondernte, there’s a dark enchanting quality to this song. The only track here that rivals it in my eyes is “Glorious Flames”; the contrast between the straightforward lo-fi black metal of the first half and the folk-tinged dungeon synth that dominates the second half highlights how naturally these two genres somehow go together.

Beyond these two songs, there are yet more moments that appear and stand out, including the subtly melodic moments that fluctuate in and out of “Burning Effigy”, as well as the almost ambient black metal opening to final track “Opening The Seals”, a well-placed relatively subdued period that allows listeners to fully take in and reflect on the ending of “Glorious Flames”. That all being said, I do still have to admit that, for the large part, this is a very conventional one-man lo-fi black metal album, and outside of these moments, it doesn’t offer much to really stand out. The mid-album double header of “Imprisoned Zealot” and the title track basically does what one would expect and nothing more. As such, while I definitely consider it to be an above-average effort for the scene it’s in, I don’t find myself compelled to give The Ninth Incantation a more fervent recommendation.

Still, across an EP, a split and now a full-length album, Lungtoucher has demonstrated that there is something more to their sound than first glances might suggest, and when so many others are just recording blasts and frozen riffs on mobile phone-tier equipment, that little something is enough to make them noteworthy. I would recommend this to fans of the more rudimentary forms of black metal, and I remain interested in how this project will develop going forwards.

Written on 28.09.2022 by
musclassia
Hey chief let's talk why not
More reviews by musclassia ››