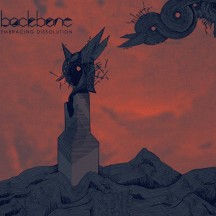 
Backbone have gracefully graduated from the Clandestine Cuts crowd.

Since I started contributing to Clandestine Cuts two years ago, there’s been a few groups in particular that have left me hungry for a full-length album. Most of them, including the likes of Autolith, Nada and Melancholia, are still yet to make that major next step, but Backbone, whose Grey Foundations Of Stone EP I covered in May 2021’s edition of the long-running series, have brought to fruition the full-length debut that they teased the existence of back when Grey Foundations was released. Backbone are a post-metal band from Poland, which, between the likes of Moanaa, Obscure Sphinx and Blindead, has a small but fruitful post-metal scene, one that Backbone are a solid addition to, based on the contents of Embracing Dissolution.

Opening with atmospheric tom drumming, trudging riffs and evocative guitar leads, “Pilgrimage” possesses a processional quality to match its name, although the song subsequently traverses eerie clean-sung sections, more up-tempo grooves and grim, doomy lulls. The rhythm section’s work is a highlight across much of Embracing Dissolution, with “Cinereal Lands” also opening with ominous percussion, albeit this time backed up by a rumbling bass line. This song brings in more of a post-rock slant, with deftly layered tremolo-based clean guitar lines floating around in the lighter sections of the song, yet Backbone have a brutish ugliness to the heavier moments of this and other tracks, whether what they’re playing is slow and brooding or more driven. Possibly the bleakest cut on Embracing Dissolution is “Starflesh”, which features the band’s original vocalist Bartosz Nauman as a guest during its droning, sickeningly low-end dirge of a midsection.

However, this is a post-metal album, and there are of course softer and more melodic parts to be found as well, which range from a delicate acoustic guitar segment in “The Ghost Theorem” to a slick, spacious jam midway through “Questioning Everything” that makes good use of guitar echo and shimmering tremolo. Arguably the most impactful moments on Embracing Dissolution are those that are both melodic and heavy; “Modernity” is a song that gradually, gradually elaborates and intensifies across its runtime, and as acoustic guitars, melodic guitar leads, thicker distortion, growls and eventually blasts all seep into the equation, the insistent momentum of this track makes a deeper and stronger impression. Similarly impressive is the closing song, “Elegeia”, which plants itself firmly in doom territory with its ponderous pace and bleak tone, but ultimately gives way to a stirring melodic outro featuring lead guitar work that reminds me most of another Polish band, Riverside, and some of their Second Life Syndrome material.

So, on the whole, this is a pretty solid album, and considering it runs for 69 minutes, it keeps the quality high enough to avoid overstaying its welcome. However, when looking back at Grey Foundations Of Stone, I do feel like the most memorable sections of that EP, particularly on the more melodic end of the spectrum, such as the majestic conclusion of “Forest Of Twilight” and melancholic climax of the title track, remain more impactful than even the strongest parts of Embracing Dissolution; while the general level of quality remains similar between the two, this debut album doesn’t quite hit the same peaks. One thing that remains similar between the two records, and not so much for the better, is the clean vocal singing; I mentioned in my Clandestine Cuts write-up that the clean vocals could do with some work, and that still remains the case here. Probably the most unfortunate aspect of them isn’t that the melodies they choose are necessarily weak or that the tone of the vocals is unpleasant, but there’s times where they sound out of tune, and that feels like something that could have been more easily addressed. It hits me most offputtingly near the end of “Calculated Silence” and early on in “Questioning Everything”, but it’s something of a persistent issue throughout.

So, there’s still room for improvement for Backbone, particularly on the vocal front but also in terms of coming up with really standout moments and sections. However, it’s not a band thing to have room for growth when you’re just releasing your first full-length album, and Embracing Dissolution is a solid base from which to grow.

Written on 07.04.2022 by
musclassia
Hey chief let's talk why not
More reviews by musclassia ››