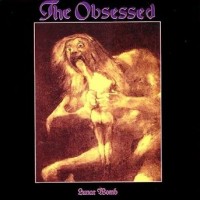 
Omne, I hear you ask, why did the band use such an awful cover for this album?

Well, let me explain by saying that, ugly cover art aside, Lunar Womb is probably the most flawless piece of doom to come out of the 90s. Yes, you read that right, forget Cathedral and the Peaceville three: The Obsessed put out the best slab of Black Sabbath worship in the 90s.

How did I come to make such a bold statement? Well, I pressed play for a start. From the heavy-hitting "Back To Zero", the thundering "Bardo", the bluesy instrumental that is "Spew" and the pure Sabbath worship that is the title track instrumental, Lunar Womb explores nearly the whole domain of doom and unearths its strength in diversity. How many bands do you know that are equally as powerful on both instrumental and sung tracks?

Ever since stumbling across The Obsessed, I found out that the name is rather apt, for they have been on regular rotation and used as a barometer against which other bands are measured.

The trio of Wino, Rodgers and Reeder make for one of the most underrated power trios going. Wino is rightly labelled as one of the most central figures in the genre, with his haunting, yet powerful vocals making tracks such as "Hiding Mask" the juggernauts they are. Managing to juggle his vocal duties with being the guitarist only adds to the myth that is Wino. That is not to say Rodgers and Reeder are merely side men; they both hold up their end of the band's sound and then some, with Reeder's rumbling bass adding a level of menace and depth to proceedings.

The gloomy and sprawling "Kachina" is perhaps my pick for best of the bunch, featuring some excellent drum work courtesy of Rodgers. The song segues between patterns and shifts gears with ease, all while tied together by Wino's riffage; the band do so with such hypnotic ease that it is hard not to put this song on repeat.

There are perhaps only two shortcomings, one I hinted at earlier; Lunar Womb doesn't have a track that drops the tempo to a slow and lumbering pace that would resemble a tank stuck in molasses. Given their prowess at other types of doom, I'm sure the inclusion would be that finishing touch that would have made this album spotless. The second shortcoming? That artwork! Eww, get it away from me! One of the few albums I'm glad I don't have on vinyl.

If you think this review is a bunch of hysterical hyperbole and that Cathedral are the premier doom band of the 90s, then that is your perogative. However, for my money, The Obsessed raised the bar for the 90s early on and no other band was able to match, nor surpass it.

Written on 24.01.2023 by
omne metallum
Just because I don't care doesn't mean I'm not listening.
More reviews by omne metallum ››