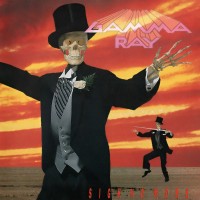 
Sigh No More is the second release of Gamma Ray, after their debut Heading For Tomorrow, and with its weird cover, it is also a weird album. The line-up is once again different, introducing Uli Kusch on drums, with still Uwe Wessel on bass, Dirk Schlachter appears playing the guitar, while the duet Kai/Ralf is at its best.

After a slightly atmospherical introduction, "Changes" opens the album and delivers a good example of the sound of the whole release: it's heavy metal, not power metal.
The next three songs also add a slight hard rock touch (in my opinion) that makes it very special and easy to listen to.
"Father & Son" is more emotional, a heavy rock ballad, really nice, with some interesting acoustic parts.
Then the most known track of the album: "One With The World", the closest to power metal in this album, considering the riffs, the lyrics, the rhythm, it also has a good drum intro/outro.
Next is the speedy/rocky, with very catchy riffs & chorus, "Start Running": when I listen to it, I actually start banging! Good solos, as in the whole album.
"Countdown" is quite of the same, with a rocking main riff and a talk-box solo (played by producer Tommy Newton).
"Dream Healer" is the longest track, the loudest (they're tuned down), also close to power metal, sometimes very slow or very fast, instrumental and lyric-based, one of the best songs by Gamma Ray in my opinion, a song a la "Heading For Tomorrow".
Final track is the pleasant and lively "The Spirit" melting acoustic & electric tunes.

The general sound of this album respects the compositions; it's clean, not so loud and heavy, far from their latest albums. It's a very good album although some don't find it to be so good, because they prefer Gamma Ray to be one of power metal's absolute reference band, and so tend to deny this one...but it's far from being a wrong or bad album, and I think this is the best album with Ralf singing, from Gamma Ray's former period.
Written by wrathchild | 27.10.2003