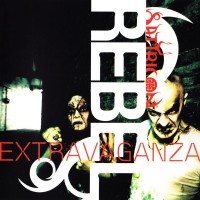 
Rebel Extravaganza: everything is in the title.
Black Metal is rebellion, and there is no 'sradition? and no fixed ways in a rebellion: Satyr knows and understand it well and he chooses a path, since the beginning of his career, of continuous evolution and breaking of values.
The album opens with some airstirke sirens and explosions, than a main slow guitar riff, than the explosion of sounds: Frost's drumming has never been so precise, fast and cold, [an incredible performance throughout the whole album] and together with Satyr's filtered screaming and the clean sounding -yet raw- guitars it gives to everything a sterile, spacy and ?futuristic? mood.
But, take care, you are not going to find any synth or industrial sound, the ability of the two norweigians is there: to create this athomosphere only with the ?classical? instruments curing much the production stage to make them sound as they wanted to. The result? 10 tracks of pure anger.
In the songwriting we can still hear the typical Satyricon style, yet if possible more varied, sometimes with a touch of hard-rock, sometimes with 'shrashy? stops and go. Satyr's voice is evil and expressive as it's never been before. The recording, the instruments and the sounds are realized, played and chosen with the greatest accuracy, everything sounds compact and ?in the right place?, and every single instrument is perfectly audible.
There are almost no highlights, since every track, both a 9 minutes cold extreme muscial aggression, and a short and gloomy acoustic interlude, has a different feeling.
I want anyway to quote the first words from the lyric of the last song ?The Scorn Torrent?: lyrically basic for the understanding of the spirit of the whole album:

-Break down all conventional forms and create
chaos to reinvent order
Rebel against all circles and dead ends
fight your way with your mind set on the massees
execute with mechanical aggression
arrogance and extravaganze
march an unapproachable
shut out the outside pressure
or are you too weak?-

As I said before Satyr sees his Black Metal as a way to ?Rebel against all circles and dead ends? and, in order to do that, he understand that is necessary to ?Break down all conventional forms and create/ chaos to reinvent order? where the conventional forms are evertything conventional, even the Black Metal stereotypes if they become so. So he chooses the way of the "mechanical aggression", and this album is indeed fast, precise and cold, and it holds a good amount of "arrogance and extravagance".
And finally, chaos is released.
The artwork too presents us the two musicians in a zombie-like make-up, we found no traces of the medieval and nordic mythologial elements, all is coloured in a grim black or in a sterile white. Emblematic is the drawing you can see inside the booklet: Satyricon's typical "runic" symbol is now fragmented, shatterd in a new chaotic form.
Satyr lyrical approach, in this album, goes over the classical Black Metal themes, and explore new territories, even if always throughout Satyr's own misanthropic and apocalyptic personal point of view. Intelligent lyrics, to be understanded, interpreted, something to reflect upon.[?Supersonic Journey? is brilliant]
Only he who dares will achieve something new, and Satyr and Frost with this album have written a basic page of extreme music. As much as Nemesis Divina was important as an apotheosis of the classical Balck Metal values, Rebel Extravaganza pushes the limit furhter on, opening a new way.
So, in the light of what I said before, this IS Black Metal.
And if you don's like it, don's listen it, but pay respect to those who decided to go against the trends- and their own fans -in order to play something just as they feel that it should be played.
That's the real Black Metal spirit, that's the courage to be coherent, that's not ripping-off.
That's simply Satyricon's rebel extravaganza.
Or are you too weak?
Written by Sephiroth | 04.10.2003