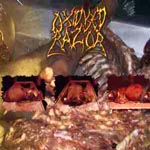 
Well the last time I heard these Mexican dudes playing was with an album called "CarneSangre", I remember that album as one of the worst experiences in my life; the production was hideous, the layout was cheesy as Archie comics, and the vocals were *insert pejorative name here*BUT the music was really catchy. That last statement was the reason why I said "yes" to those messages requesting a review on this album, as the music wasn't that bad I decided to give these guys a chance.

And I'm glad I did; "Los Vendedores de la Muerte" is actually a good album (I was tempted to say very) the structures are way better than their last effort and finally we can hear decent songwriting skills. Fortunately we still have that catchiness that distinguishes Oxidised Razor and the humorous factor as well; this album is a neck breaker to say the least; most tracks are performed in such an energetic way that will wrap your brain in bouncy/groove feelings from the beginning to the very end.

The intro of the CD (Entre Los Muertos) is a bizarre cover-fusion of Anthrax's "Among The Living" (I'm sure you remember that song) with the band's own gory specimens; I was amazed by the way they started their album, it was at least more mature than "CarneSangre" that's for sure. Then the album starts grinding your face with crushing beats, low tones, shredded and catchy guitar riffs; the formula is quite simple actually, but the final product is quite pleasing if you know what I mean.