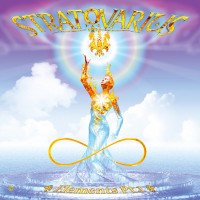 
Ah... the long-awaited new Stratovarius album! I should say, this 3-year break proved very helpful for the guys - Elements pt.1 sounds really fresh and is definitely better than the previous two efforts (Destiny and Infinite). It's also VERY epic - at times you even think the guys went a bit too far with this obsession for the epic-orchestral-choral stuff. Well, I shouldn't complain about this, since I'm obsessed with the same thing.

The album opener (and the new single) Eagleheart, Find Your Own Voice and Learning To Fly are the faster and more straight-forward songs and have this instantly recognizable Stratovarius trademark sound. However, they are better than usually (remember Glory Of The World and Freedom off the previous album - typical fillers!) - maybe because they are not as cheesy... Well, alright, they are cheesy - but that's Stratovarius we're talking about

But what really fascinated me about this album were the epic and heavily orchestrated songs, Soul Of A Vagabond, Papillon and Elements. Damn, they are absolutely amazing (Papillon being less amazing because of this annoying boy singing in the beginning and in the end). This is exactly what I love about Stratovarius and been longing for since Episode, which was filled with this kind of songs (Eternity, Uncertainty, Season Of Change). But this time they have more power and, of course, these lush mindblowing orchestral and choral parts. These are definitely the songs that made this album.

Fantasia is quite an unusual song for the band, especially the beginning - a good sign, actually, since (let's face it) Stratovarius have never bothered themselves with much originality. Clever orchestration also adds a very nice touch.

The first instrumental since Visions, Stratofortress, left no impression on me at all. Boring.

The album closes with a VERY nice quiet acoustic ballad Drop In The Ocean, accompanied once again by symphonic orchestra and some ocean sounds. The great ending for the great album.
Written by Ivan | 22.09.2003