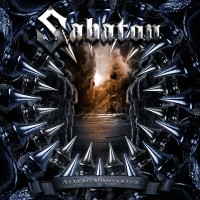 
17 Months after the release of Primo Victoria, an album which received a lot of very good reviews and overwhelming praise from metalheads in the whole world, Sabaton is back.

The first thing that caught my attention, apart from the rather sinister cover art, is how the built of this album is similar to that of Primo Victoria. Both CDs are named after the first track of the album, which has a Latin name [Attero Dominatus = Attack, Dominate] and are composed of nine songs, the eighth being a ballad and the last one being the only song not about war. The lyrics of the last song are made mostly out of the names of famous and influential bands.

Now to the music:
What can I say? It is still extremely epic, highly bombastic, quite heavy, very melodic and exceedingly catchy, so not much has changed since their last release. Don't let these words fool you though; this is not a second Primo Victoria. This time it's a bit harder to fully get into. It sounds more polished, less catchy, and often slower, it is more heavy metal influenced and there is also a high number of solos on this CD, however none of them outstanding.

The big downsides of this album though, are tracks number three and six though. While the sixth track, Angels Are Calling, isn't in itself a bad song it clearly doesn't live up to the high standard we have come to expect from Sabaton songs. The third track, Rise Of Evil, however, is in my eyes a total failure at trying to make a very epic song. Something Sabaton certainly don't need, as all their other songs are already extremely epic next to being very powerful. This song on the other hand, is very weak, and at 8 minutes much too long for the too low amount of variation.

Apart from these two songs though the whole album grows on you, at first listen I thought of the whole album as clearly inferior to Primo Victoria. But now I actually like the two CDs equally. Here the higher technical standard makes up for the lower level of catchiness, yet it still catchy enough that you will be loudly singing along after three listens at most.