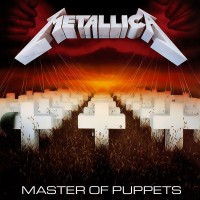 From the intro of "Battery" to the last guitar riff of "Damage Inc." the cd is just perfect, incredible and all the adjectives you want. In this album Metallica composed the song of songs: "Master of Puppets", astonishing. 8 minutes 38 seconds of pure Metal. The virtuosity on composing of Metallica appears clearly in that song. In Master of Puppets [maybe influenced by Black Sabbath] some songs are really dark and paranoid like "The Thing that should not Be". A ballad is also included, which is called "Welcome Home [Sanitarium]" and Metallica still includes in this album an instrumental track: "Orion" [with an intense and melodically brute bass line, perfectly played and composed by bass-God Cliff Burton]

On balance the cd [as you can see my favorite one] is really good, I will recommend this album to all people, especially to people who want to start listening to Metal, because this has been very important to the evolution of music, this is one kind of Led Zeppelin 4th album , Iron Maiden's: Number of the Beast. Just indispensable.

Metallica was in the top when in a terrible accident Cliff died. The band was touring in Denmark, when suddenly at night the Tour-Bus slide in an ice badge, the day was : September 27th of 1986.

Thank you for your beautiful music