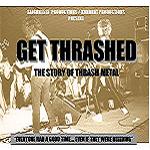 How does Get Thrashed compare to last year's big metal documentary Metal: A Headbanger's Journey? Well, Get Thrashed limits itself to just one subgenre of metal thus delving deeper into the aspects of it. Get Thrashed isn't as slick as Headbanger's Journey due to the fact that Get Thrashed is a self-financed project. Which in my opinion is its strong point as well for that accentuates the rawness and do-it-yourself ethics of the early thrash days. And Rick Ernst limits himself to what he knows and loves best, unlike Sam Dunn (although I mightily enjoyed Headbanger's Journey) who goes over to Martin Popoff (metal journalist) for his subgenre charts and then goes terribly wrong classifying quite a few bands.
But the two documentaries can't really be compared due to the generality of Headbanger's Journey and the genre specificity of Get Thrashed: The Story Of Thrash Metal. Having seen one of them is no reason not to see the other. I would even recommend seeing both of them.


So, is this documentary worth the wait? And will it be worth buying when it is released on dvd? A resounding… Hell, yeah! Hopefully it will be like what Ernst told Terrorizer in an interview he did with them which was published in Issue 123, September 2004 that the dvd version will include over an hour's worth of additional material and will include features on many more bands that could not be included due to time constraints of a television program.
The constraints are probably also the reason why things I really did miss were left out. Nope, I am not talking about the Arizona thrash scene (Flotsam & Jetsam, Sacred Reich, Atrophy) because that is already the second, and not very influential, generation of thrash. And also not more on thrash from outside the US and Germany. Why would there be more focus on that? The only really big and influential mover within the thrash scene from outside those two countries was Sepultura. What I really missed were two things… firstly, something on producers/engineers of thrash albums. People like Michael Wagener, Bill Metoyer, Mark Whitaker, Harris Johns, Alex Perialas, Mark Dodson, Michael Rosen, Carl Canedy, Eddie Kramer, Flemming Rasmussen, and so on.
And secondly, interviews with well-known artists of thrash album covers like Ed Repka, Don Brautigem, and Pushead.
I watched Get Thrashed with quite a few metallers (people who were into thrash back in the day and younger metalheads who only got into thrash in the late nineties) at my house so as to see what their reactions would be to it. Well, both groups really enjoyed it, the older guys and girls already knew most, to all, of the subject matter presented here but thought it was a brilliant trip down memory lane. For the younger generation it was really interesting for there was quite a bit they didn't really realise and now they could hear it all from the mouths of the players of those days. A striking difference between the two groups of watchers was the way the younger generation reacted to Lamb Of God, Corey Taylor (Slipknot and Stone Sour), Chris Jericho (Fozzy), Chimaira, Shadows Fall, Kittie, Killswitch Engage, Jamey Jasta (Hatebreed). They got upset by the fact these artists were interviewed because according to them they aren't thrash, having nothing to do with thrash, and are only making metal for the sake of earning a quick buck and are posers when it comes to thrash. Well, on posers… what was considered a poser back in the day is clearly explained in Get Thrashed. The people who grew up with thrash thought it was a good thing that the interviews with those artists are featured for it gave an insight on how thrash has influenced, affected and is seen by those people.

So, all in all, a must see for anyone with the slightest inkling of interest in the history of metal in general and thrash metal in particular. A great job well done by Rick Ernst. This is a documentary he can certainly be proud of.