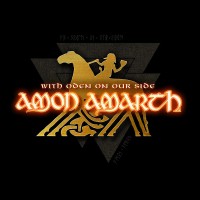 
Amon Amarth released their sixth full-length album "With Oden On Our Side" on September 22nd 2006. Whoever had been disappointed with their preceding full-length album "Fate Of Norns" must certainly have got over that disappointment after listening to this album because the band has once again moved closer to their older style of songwriting and their sound in this album is similar to that of their old releases like "Once Sent From The Golden Hall."

With songs rich in melody and masterful composition, a listener will certainly not find a boring moment in this album. In a particular album, sometimes, some or many of the songs sound similar to each other (due to similar riffs/rhythms/solos etc.) and because of this the listener might feel bitter; I can assure you that, in this album, you won't find this type of defect, every song sound quite different from each other and aren't even similar to their old songs; this album is a totally fresh piece of music.

With the song "Valhall Awaits Me" the album begins, and throughout the album you can find the same energetic performance and catchy melody. The vocals have indeed added life to the lyrics (which usually portray wars related with the Vikings) and has enhanced the songs; similarly, every instrument has helped in enhancing the songs and the performance of the band members is worthy of appreciation. In the songs here you'll find melodic riffs, complex pieces of music and extremely catchy solos (however solos aren't present in every songs). I find every songs in this album impressive but if anyone were to ask me which songs shouldn't be missed out I'd name songs like "Valhall Awaits Me," "Runes to my Memory," "Asator," "With Oden On Our Side" and "Cry of the Black Birds." I don't mean to say that other songs are less special, you are actually making a mistake if you limit yourself within only a few songs of the album.

Well, the band has added one more brilliant album to their discography with the release of this album, and this album has, to a great extent helped the band to maintain their image of "great melody-makers." I'd call this album a masterpiece (although it may not be the same to all due to variation in opinions), and would highly recommend this album not only to the fans of the band and death metal but also to fans of melodic metal music