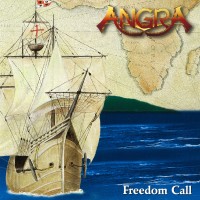 
Here is a good EP from Angra: 'Painkiller' [cover of Judas Priest], 'Freedom Call', which is one of their best songs, 'Queen Of The Night' [previously released as a bonus track on "Holy Land"], two other good tracks and two bonus tracks with the acoustic release of 'Angels Cry'.

Seeing such a good EP, why didn't Angra make a whole album out of it? Anyway, this is a good record, nevertheless "Freedom Call" can't be considered as a standard studio album unless you haven't previously heard most of the songs. In fact, all these tracks have been released sooner except the eponym title 'Freedom Call' and the cover of Judas Priest's 'Painkiller'... However, as Angra's first demo called "Reaching Horizons" is quite rare, you've probably never heard the track 'Reaching Horizons', and trust me, you don't want to miss that one.

The bad thing about "Freedom Call" is that the two last songs are bonus tracks and thus, some versions of the album are very short... [6 songs only]. Nevertheless, people who have liked Angra's previous releases will enjoy "Freedom Call" as for the others, get "Holy Land" right now!

Written on 26.08.2003 by
Dream Taster
Bringing you reviews of quality music and interesting questions such as: