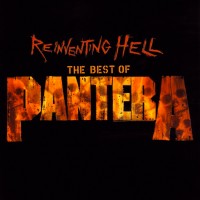 
Best of compilations usually mean a couple of things. On the one hand it could signal the need to deliver an album to the record company for contractual reasons, or it will inevitably signal the end of a band. In Pantera's case, I think it's a combination of the two. With a bitter feud being fought over the Internet between vocalist Philip Anselmo and the remaining members of Pantera, a reunion looks unlikely anytime soon.

With a couple of albums left owing to the record company, an obvious easy way out is to release a best of, which brings us to ?Reinventing Hell ? The Best Of Pantera?. Now unless you're new to Pantera, there's really nothing on this sixteen track album that you wouldn's already otherwise own.

Spread over the course of their career, the set starts from their major label debut ?Cowboys From Hell? in 1990 [?Cowboys From Hell?, ?Domination? and ?Cemetery Gates?] before moving onto the 1992 classic ?Vulgar Display Of Power? [?Mouth For War?, ?Walk?, ?This Love? and ?Fucking Hostile?]. By the time 1994's ?Far Beyond Driven? was released [represented by ?Becoming?, ?I'm Broken?, ?5 Minutes Alone? and Black Sabbath's ?Planet Caravan?], Pantera really had hit the big time.

Perhaps the most aggressive and darkest album the band has released to date was ?The Great Southern Trendkill? in 1996 [?Drag The Waters?], and consequently it confused a lot of their fan base. The live album ?Official Live: 101 Proof? [?Where You Come From?] helped soothe those who thought the band had slipped off the tracks, but things were anything but stable within the band. 2000's ?Reinventing The Steel? [?Reinventing The Steel?] was a bland affair, and also signalled the band members moving onto individual projects, which is still the case as we speak.

As an added bonus to this best of is the inclusion of ?Immortally Insane? [from the soundtrack to ?Heavy Metal 2000?] and the cover of Poison Idea's ?The Badge? [from 1994's soundtrack to ?The Crow?].

Along with liner notes from legendary writer Don Kaye [Kerrang!, Guitar World and Metal Edge], the album also comes with a bonus twelve track D.V.D. featuring all their promotional video clips to date. But again, all except one [?Revolution Is My Name?] have been previously released on the D.V.D. ?3 Vulgar Videos From Hell?.

All up, this is a good compilation for the novice Pantera fan, otherwise pointless for the true die-hard collector. With another album left owing to the label, expect Atlantic Records to release a live album next, with possibly a new D.V.D. to follow at a later date. As for Pantera, expect a reunion at little later down the line with, ?Well we never actually split in the first place? being the punch line.
Written by Justin | 12.10.2003