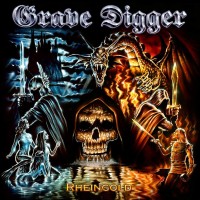 
The latest output from my favourite german band is a concept album on the topic of the Ring of the Nibelungen myth. When I first heard and read about Rheingold I thought about another attempt of following the trend of metal + symphonic orchestra like Metallica and Scorpions did not too long ago, but my thought were mislead and it turned out to be different. The Grave Diggers rather got some inspiration by the compositions of Richard Wagner.

Clear you will hear the inspiration in the very intro of this record called 'The Ring' a classic composition, but as I'm not firm with the songs from Wagner I cannot say if the melody is copied or something, but I wouldn't think so since Grave Digger have always been inventive enough not to do so. Anyway followed is the intro by 'Rheingold' and Valhalla' which are truly very typical Grave Digger songs, but no need to go into details for those. Pretty annoying is the chorus of 'Giants' which consists of the word giants only repeated several times, embedded is a nice classical part, right before the solo. The next remarkable song is 'Maidens Of War' with its calm passages followed by hammering drums and speed riffs changing from verse to bridge and chorus. The real peak is reached with the song 'Sword',
It has a classic kind of intro itself, adding the sound effect of the hammer going down on an anvil creating the impression of the sword being forged under great efforts of strength. Besides this the song is great as a whole, it's dark and atmospheric, it has a good rhythm, strong lyrics and a cool part with bass and the hammer sound!
'Dragon' starts with an intro like blowing horns from a mountain, too, going from a dragon's roar into some good metal song…'Kill kill the dragon!'. The rest of the album does quite well, even better when you own the digipack with the two bonus tracks 'Hero' and 'Goodbye'.

Ex- Rage(r) Manni Schmidt's guitar work is great, having a strong impact on the sound of Grave Digger, which could be heard the first time on the 'The Grave Digger' album. Once more the booklet has been enhanced with explaining text passages on the story of Siegfried and the Nibelungen ring. Regarding the whole album I'll give it an 8, it's not their best, but there is no need to despise it, since it ranges among the heights of 'Knights Of The Cross' and 'Excalibur', even if this only counts for me, make yourself an own opinion on it.