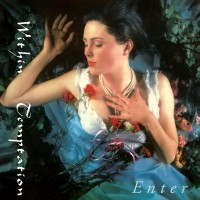 
To start, there are a lot of bad feeling about Within Temptation nowadays, mainly since "The Silent Force" was released a few years after the frankly wonderful "Mother Earth." Fans just couldn't understand why the band they loved were beginning to move from from heavily symphonic metal to a more mainstream sounding Evanescence clone. Sadly, I agreed with this sentiment, and come the release of "The Heart of Everything" I was pretty much too depressed with the change to listen to WT any more. Don't get me wrong, both albums have some really great tracks on them, but I like my metal a little bit less MTV all the same.

So it's just as well I can now look back at WT's debut album and remind myself why I love this band.

Back in 1997 Enter was released, and this is why the METAL world, not the rock and pop groupies, sat up and took notice of this new band. The album sits between gothic metal and doom, a viewpoint I steadfastly cling to. In general the music is slower and more crushingly depressive than most gothic metal bands, even early Theatre of Tragedy and Tristania. As the first few bars of "Restless" begin, with the constant piano accompanying Sharon's ridiculously high vocals (which still manage to sound comfortably within her range) the listener knows that the album is going to be one whole trip into sadness, if not actual apathy. "Restless" is actually the lightest track on the album, definitely an indication of what would be perfected on Mother Earth. Come the next track you realize that back then WT were actually a HEAVY group. Here we have extreme vocals, crunchy guitars, slow driving drum rhythms (no double kicking here) and all the while Sharon's voice floating above the despair in a deliciously cliched gothic detachment.

Te tracks on Enter can really be divided into two groups. First is the heavier, more doom laden tracks such as "Enter," "Gatekeeper," or "Blooded," and it's definitely the more prominent type of track on the album, also the one track "Deep Within" which doesn't feature Sharon at all (other than some subtle backing vocals I believe); even the synths take a back seat to the extreme vocals, which acts as a brilliant pause in the album. The second type of track is that of the lighter, synth driven WT like in "Restless," "Pearls of Light," and "Candles," which begin with light instrumentation such as piano or harp-synth before the guitars and drums kick in to carry the melody along to a climax.

A brief mention of my favorite WT track of all time - "Grace." I think the main reason I like this song isn't just that it is a good example of the heavier side of early WT, but that Sharon really shows off her vocal range, not just in being able to swap octaves at ease, but in the way she managed to sound truly evil at times. It makes you pause, and gives you chills to think that despite the beautiful dresses and soaring voice she could do things to you that you'd only ever dared dream of, and probably even manage to keep you conscious while doing it! Or that might just be me.

So all in all I have to say any metalhead that likes gothic or doom metal should already have this album, just to remind ourselves that Within Temptation were a good, HEAVY band who wrote good metal once upon a time. Maybe that will stop the tears next time we see them on Scuzz or Kerrang. Despite not one single song from Enter appearing in their last tour, if WT ever use their new fame and fortune to again release an album as marvelous as this I will take back any disparaging comment I have made about them. This was the era when catchy riffs weren't just limited to repetitive backing guitar work.