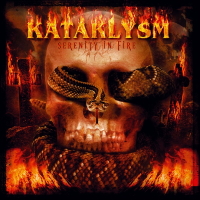 
This is my first encounter with this Canadian veteran Death Metal act, so I can't really tell you about the evolution of their music, or how this album is different from the others, and all that crap, I could of course, search reviews of all of their previous albums, and copy + paste slightly changed commentaries from other critics, I could say that I followed these guys since their early releases back in 1992, I could make an extensive review about the line-up changes (if there's been any), the progress of the band among Metal fans, and so on, but instead of that I prefer to do a very simple review, Kataklysm - Serenity Under Fire from my point of view, old time Metalhead, first time Kataklysm Listener.

The Album starts with an spoken passage taken from the 2003 movie "Road To Perdition" (Starring Tom Hanks), it goes like this: "This is the life we chose, the life we lead, and there is only one guarantee: none of us will see heaven". After the passage, heaven can kiss my ass, because this guys blast things off with "The Ambassador Of Pain" great album starter, the drumming is madness!! The double bass is one the best I've heard since Fear Factory, and the melodic parts mixed with the riffs and the more brutal sections of the song just melt into one terrific song.

"The Resurrected" gives us a first glance of the backing vocals, (less grunty, more shrieky), the combination of the 2 type of vocals is amazing. "As I Slither" has one of the most catchy choruses in Death Metal history, I can't stop singing it!
"The Night They Returned" has fantastic riff work, and of course, the double bass again, I think my favorite song in the album is "10 Seconds To Die" wonderful song, here we can witness a duet between the both type of vocals, reminded me of a Deicide song, " Revocate The Agitator" sadly, is the shortest song in the album (clocking 2:46).

This album is just madness, prepared to enter a new dimension of insane drumming and maniac riffing, and must say that, this is, until now, a really good year to Nuclear Blast, a lot of good releases under their sleeve.
Fans of brutal yet melodic Death Metal, should get this one immediately,(well, as soon is released March 08, 2004) until that day, you could go and look the past discography of these guys, because is exactly what I'm going to do.
Written by Undercraft | 05.03.2004