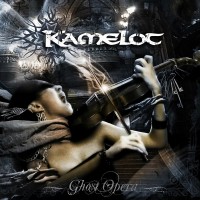 
A long time ago we were looking forward to the "Epica" album, an album like "Karma" but better. The same thing happened with "Ghost Opera". All of us, looking for an album like "The Black Halo" but better. But this time, I believe, things are completely different. I think that we can't compare Ghost Opera to another of Kamelot's album. The reasons are explained below...

First of all, the music is completely different, more progressive, more complex and darker. There is a different musical approach that has no similarities with the other albums, an approach that makes the album unique. For me it's one of the most original albums I have ever listened to. However, I have to admit, that in order to enjoy, understand, get satisfied with this album, you have to let it spin a lot of times in your player, because of its complexity. The concepts of the lyrics are also a factor. I have never listened to songs that the lyrics deal with a German cruise of WW2 (Blucher), or Jesus trial (Up through the Ashes). We should also pay attention to how the band used samples this time. The "always ticking during the song" clock in "Human Stain", the Gregorian chanting atmosphere in the first 41 seconds of the "Mourning Star" are noteworthy.

We have to admit that Kamelot, is a band that likes trying, creating, testing in order to produce something that's always new. They're not a band that plays the same thing over and over, which is a plus for them and for the album. Of course, there is the chance of failure when you always try for something new, but I don't think we have a failure here.

On Ghost Opera, Kamelot have also written some great ballads, such as "Love You To Death" and "Anthem". Kamelot have a tradition of writing good ballads, but these ones are highly emotional, like never before in the past. "Love You To Death" has a medieval flavour and the strings give a "tune of doom", if you could say that. I also have to admit that the dark lyrics give you the chills. Anthem, is a simple song, with the lead piano and the vocals doing the entire job. It's a solid symphonic track, a really good song as long as it has to do with music, but the lyrics...the theme could've been something more original.

The bad part of this album is that there are no duets like "March Of Mephisto" or "The Haunting" (from The Black Halo). Love You To Death is a duet but it isn't as strong as the two songs I just mentioned. Of course there is no reason to comment the album's production and the band's performance either. Both of them are perfect. Also the two bonus tracks, "Pendulous Fall" and "Season's End" are too good to be bonuses, they both should be regular album songs. Finally, I believe that the next album of Kamelot, just like Ghost Opea, is going to be an album to remember.