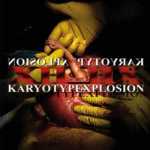 
Xhohx is a relatively young two-piece from the shores of Belgium. According to the band members themselves, the band exists solely because of "two musicians' will to get rid of their own musical education". After their grouping up in 2002 it took them up to 2007 to release their début album. Now put these two facts together and try to imagine what sort of non-musical, crazy, highly ADD piece of music that will form. Does that sound similar to an older, more known band? That's right; Ephel Duath must have had a hell of an influence on these guys.

Xhohx seem to be out for one thing and that is to make your life as miserable as possible. You cannot pronounce the band name, you cannot pronounce the song titles and you most certainly cannot follow the flow of this album. If there even is one. What Xhohx offers is three quarters of an hour of experimental/progressive metal, with a lot of so called "fusion" thrown in.

That results in a ton of very fast, very short riffs, without any form of repetition. Usually these riffs pass by only once or twice, though sometimes in a different scale, but it does not matter anyway. The drum machine, bass, vocals and occasional piano do exactly the same, that is, they do completely different things at all times. Your brain will be too busy to try and stay sane that it cannot recall what the hell happened a mere five minutes ago, and will simply let the music pass as a sonic wave of incomprehensible sounds. Annoying? Most certainly. Freakishly attractive and interesting? That as well.

Even though this album annoys the living daylight out of me, it does keep me interested. For one there is the unexplainable desire of wanting to be at least once able to know what song is playing without looking at the cd-player, and another reason is that I want to find out what happens with my perception of the music once I'll finally "get used" to it. Actually, just the getting used to part will be an achievement to be proud of for the rest of my life. After many listens, this still baffles me. How will this affect you?

Written on 22.08.2008 by
Lucas
If you're interested in extreme, often emotional and underground music, check out my reviews. I retired from reviewing, but I really used to be into that stuff.
More reviews by Lucas ››